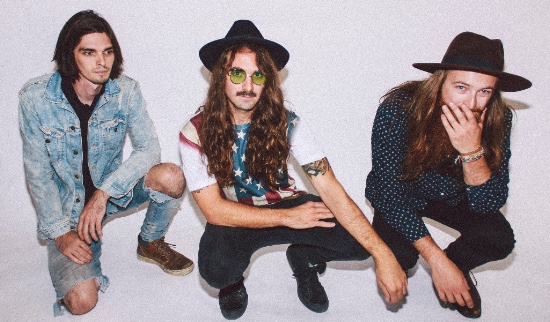 Founded in 2015 in Montreal, Canada by singer/guitarist Mick Martel, drummer Antoine St-Germain and bassist Frederic Couture, The Hazytones is a heavy stoner rock trio renowned for their onstage presence and musical intensity.

In September 2015, they earnestly began work on their debut album at ReelRoad studio in Rosemont – La Petite-Patrie in Montreal. An unmistakable labour of love with recording and mixing taking many months, the band released their first single and music video for ‘Living On The Edge’, at the same time ushering in an inaugural, twenty-three show tour across Canada.

Almost a year to the day after entering the studio, The Hazytones – the band’s self-titled debut album – was self-released on 22nd September at La Rockette Bar at the Pop Montreal Music Festival and widely received shortly after by stoner/psychedelic rock communities in Canada, USA and particularly Europe, where the band toured, taking in the UK, Belgium, Switzerland and France.

Returning from the tour, The Hazytones drafted in new bassist and backing vocalist Adam Gilbert in place Couture and ever since have been holed up writing new material for album number two ahead of the official release of The Hazytones on 3rd November 2017 through Ripple Music in the USA and in Europe on Kozmik Artifactz.