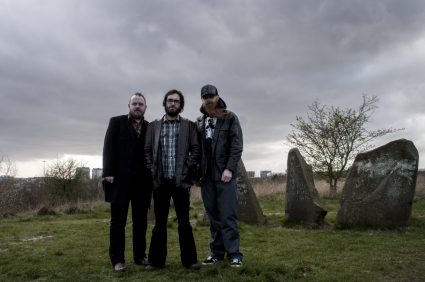 Last month we told you all about their new EP, now we introduce the Scottish doomsters to you

Formed in 2011, Headless Kross are Tommy Duffin on guitar, Jonny Montgomery on drums, and Derek Sexton on bass and vocals.

Their first album ‘Bear’, recorded at Tommy’s 16 Ohm Studio, was released in 2011, and was the Bone Reader’s Best Unsigned / Independent Album of 2011. The following summer they released the ‘Demises’ EP on limited numbered CDs, and in early 2013 they released a split 7” with Belfast’s War Iron.

Later that year the Head of Crom label released a split 12” with Lazarus Blackstar. The Headless Kross side was a 17 minute epic mutation of Amon Duul II’s “Deutsch Nepal”, which was described as being “as impressive as it is expansive” by the Sleeping Shaman webzine. Rock-A-Rolla magazine claimed it was “…something precious few would attempt and even fewer could do justice to, but this Glasgow three-piece somehow pull it off“.

In spite of work commitments (Tommy and Jonny work with a whole-foods cooperative, Tommy runs the aforementioned studio, and Derek is a college lecturer), the band try to play live as much as possible, showcasing their songs with no breaks, and no talking, barring the briefest of introductions. They have played with Conan, Ommadon, Coltsblood, The Body, Satan’s Satyrs, Orange Goblin, Bong, The Cosmic Dead, Drunk in Hell and Black Magician among others. In December 2012 they were invited to Belfast to play Slomatics’ end of year bash, and have returned to Ireland twice since, headlining packed shows in Galway, Cork, Dublin and Belfast.

The band are currently preparing new material, and rehearsing for upcoming shows. They are looking at booking shows in England in 2015, in an attempt to tap into that lucrative market, with tentative talk of European festivals on the horizon too.