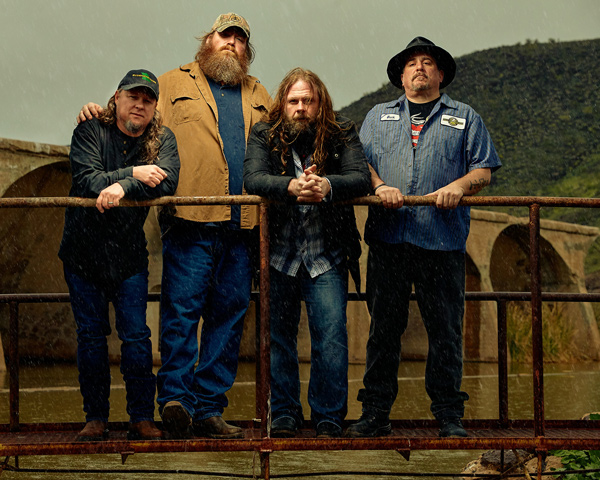 Hailing from Arizona, Hogjaw are four longstanding friends, a band of brothers, delivering “hard hitting southern fried electric guitar rock” with no punches pulled and no whiskey-shot left on the bar.

One of the foremost things about Southern Rock is that it’s music based on heritage, with common values holding sway, and Hogjaw – JB Jones (vocals / guitar), Jimmy Rose (lead guitar), Elvis DD (bass) & Kwall(drums) – are cast in the finest traditions of the genre, as latest / sixth studio album, ‘Way Down Yonder’, clearly shows.

Produced by the band & Byron Filson and featuring 11 new tracks ranging from the clean mellow pickin’ of ‘Back Home Today’ through to the heavy swamp groove of ‘Never Surrender’ and the foot-to-the-floor riffin’ of video track ‘Brown Water’, this is music that proudly flies the flag for pure rock from days gone by, tapping into the soul and the spirit of Capricorn Records’ legends such as The Allman Brothers, The Marshall Tucker Band and The Outlaws.

“With hard rockers, some clean pickin’ and singin’ and plenty of that thunderous riffin’ you have come to expect, this new album is guaranteed to bring back that old time rock ‘n’ roll vibe we all loved so much. Just put the music on, pour a cold beverage and clear your schedule!”

Renowned for their live performances, Hogjaw will support the arrival of ‘Way Down Yonder’ – available digitally from October 6th – with a gargantuan 40-date tour of mainland Europe, their fourth since launching their ‘Devil In The Details’ debut in 2008. From late September through to mid-November, the band will be visiting 11 different countries, selling CD copies of ‘Way Down Yonder’ exclusively at the shows – a full commercial release will follow early next year.

Hogjaw‘s previous studio album, ‘Rise To The Mountains’ (2015), will be digitally re-issued via Snakefarm on October 13th; as with ‘WDY’, the physical, repackaged version will follow in January 2018.