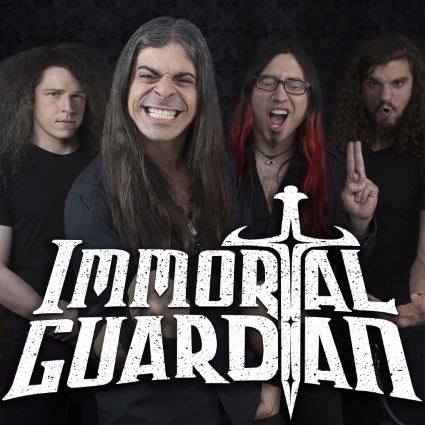 If technically incredible Power metal is your thing, you might want to check out Immortal Guardian

Since the bands conception, Immortal Guardian has stuck to what they know best – face melting, mind-blowing, melodic shred metal.

IG began as an outlet for both Guardian and Gilliland’s respective virtuosity and interest in composition. Many of the songs created in those early high school years can now be found on Immortal Guardian records today after evolving over time and withstanding a handful of lineup changes. Past members include second lead guitarists Levi Lumbreras, Mike Vidal, and most recently Jyro Alejo, along with bassists Foster Minor and Daniel Chapa, as well as original vocalist Wesley McCool.

For a good portion of 2011 Gabriel Guardian was on and off the road while filling in on lead guitar for Montreal, Canada based metal band Blackguard (Victory Records). He accompanied them on 2 international tours in which they were direct support for Kittie, Kamelot, Evergray, Sabaton, Nevermore, and others.

After coming back from touring the country, Gabriel sat down with the band and produced their first record out of the bedroom in his apartment. IG completed some national touring during the early years and released their first EP in 2012 titled “Super Metal” with the following line-up (Guardian, Gilliland, Minor, McCool, Alejo). The band dropped the EP during March to coincide with the international music festival South By Southwest in Austin, Texas where they capitalized on the hundreds of thousands of festivalgoers via the first incarnation of their Immortal Guardian Shred Sled. Band manager Brett Rivera along with co-creator of the Shred Sled Andrew Gonzales put together a guerilla marketing campaign that they dubbed “Shredding In The Streets of SXSW” as an effort to push the record.

The band used a gas powered generator, small PA system, light show, and electronic drums atop a wheeled platform to do pop up power metal performances in the heart of the festival on the crowded 6th Street. It received great reviews from a multitude of media sources, one being SPIN.com who put them on their “50 Best Things Seen At SXSW” List.

In the summer of 2012 vocalist Wesley McCool left the band to join the military and IG began a worldwide video campaign search for their perfect frontman. Incredible submissions came in from around the globe but in the end the band found their man after doing some internet research of their own. A

fter stumbling upon a singer from a band out of Houston, Texas called OUTWORLD via a YouTube video called “War Cry”, the band had to find out more about this Carlos Zema character and his golden voice. Band manager Rivera first reached out to Zema via a Facebook message where he sent some links to videos and music of IG. Carlos who was originally from Brazil and relocated to the US because of his work with OUTWORLD replied back letting him know he recently parted ways with the band and was currently living/working out of Austin, Texas, one hour away from IG’s then location of San Antonio.

Could it all be destiny, fate, or just pure coincidence that things played out this way? Upon getting to know their new candidate, Mr. Zema, the band would soon learn that it was a combination of all 3. During the first meet up between IG and Zema, the Brazilian native revealed several strange coincidences that made the selection process a little easier. He informed us of his first band down in Brazil that was called Heaven’s Guardian, which he proved by showing them the tattoo across his upper back. He then told them his birthday, March 24th, which just so happened to be the date IG released their first EP Super Metal. These coincidences along with the obvious plethora of talent in Zema’s voice made for an easy selection, and metal history was made.

IG got to work teaching Zema the old songs first while always experimenting on new material to keep things fresh. IG re-released their debut EP titled “Super Metal” in its entirety with Zema on vocals in June 2013 prior to leaving for their Super Metal Brazil Tour. Being that it was pretty much the same record musically, but with new vocalist Carlos Zema giving the songs a whole new life via new melodies and slight lyrical alterations, the band titled the record “Super Metal: Edition Z.” After returning from Brazil the band continued to perform and work the Texas metal scene before getting officially sponsored by Fender and Jackson Guitars in November 2012.

The affiliation with the two top guitar companies came after Gabriel Guardian and band manager Brett Rivera decided to knock on the door of a Fender artist rep whom they had no previous contact with or an appointment for that matter. Rivera, armed with just his iPad containing self produced video content of Guardian’s simultaneous guitar/keyboard shredding abilities stuck his head into the Fender office and said “I work with a guitarist who does something that you’ve probably never seen before, could I have a minute of your time?” Our Fender rep looked up from his desk and with a sarcastic smile says, “Oh great, another guitarist…” Intimidated to say the least, Rivera pushes play on the iPad as he and Guardian walk into the room without an invitation and approach the desk. The Fender rep looks at iPad, looks at Gabriel, looks back at the iPad, looks back at Gabriel and says “That’s really you?” Gabriel responds, “Yep.” The rep replies, “…I think we can work something out.”

The band continued to write and record from 2013-2014 while producing their second EP “Revolution Part I”, the independently released follow up to their debut EP “Super Metal: Edition Z” and prequel to the band’s first full length album “Revolution Part II”. For this second EP, legendary producer/engineer Roy Z was brought into the mix to give the record a unique sound that evokes the NWOBHM stylings heard in his high profile clients such as Judas Priest and Iron Maiden’s Bruce Dickinson. Roy Z, who plays guitar in Rob Halford and Bruce Dickinson’s solo projects also makes a guest appearance on the record with a guitar solo in the track titled “Immortal”. “Roy completely molded the band’s sound in the recordings…” stated frontman Carlos Zema about their experience working with the legendary producer, “…It went from water to wine.”

Shortly after the release of Revolution Part I, longtime bassist/songwriter Foster Minor left the band for personal reasons and IG brought on Thad Stevens, an amazingly talented and technical fretless bassist out of Beaumont, TX. He and Gilliland fused together to form a solid rhythm section for the band, keeping things super tight while still pushing the progressive boundaries of one another. The last lineup change that lead to IG to becoming a 4-piece was when Jyro Alejo left the band for creative reasons in March of 2015. The band has received industry credit via media outlets such as SPIN Magazine, Metal Injection, Metal Sucks, Metal Insider, Brave Words, Metal Underground, Gear Gods, Whiplash.net (Brazil) Heavy Nation (Brazil), Cycle Source Magazine, and Roadie Crew (Brazil), as well as acknowledgement from prog-metal luminaries such as Michael Angelo Batio, Jeff Loomis, formally of Nevermore, Michael Romeo of Symphony X, and Travis Richter of The Human Abstract.

Immortal Guardian is currently in the preproduction phase of their first full-length record titled “Revolution Part II” which is set for a late 2015 release. Stay tuned for the next chapter in heavy metal history….