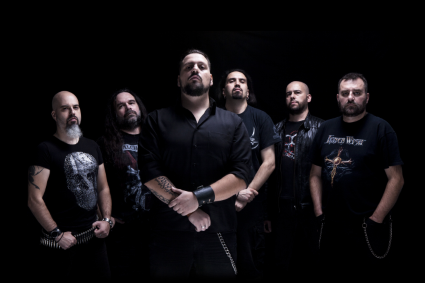 Power metallers from Greece with a new record out next month

The story of INNERWISH began in 1995, in Athens, Greece and in their 20 years of existence they managed not only to be one of the most important metal bands from Greece, but also establishing themselves as a respectful band in the European melodic metal scene.

In 1998 they released their debut album “Waiting For The Dawn” through NMC Records, followed by a split CD together with their friends Reflection, entitled “Realms Of The Night” in 2001, through the same label.

Their second full-length album “Silent Faces” was released in 2004 through the famous German label Limb Music and so was their third album “Inner Strength”, in 2006. The response for both albums was very encouraging, especially in Europe and Japan. Sharing the stage with bands like JUDAS PRIEST, HELLOWEEN, U.D.O., THERION, CAVALERA CONSPIRACY, WITHIN TEMPTATION, MANOWAR, RHAPSODY, ORPHANED LAND, OPETH, and BRAINSTORM among others in shows all over Europe and in Greece helped spreading the INNERWISH name.

In 2008 INNERWISH entered the Devasoundz Studios in Athens, Greece and recorded their fourth album “No Turning Back”. The album was mixed by Fredrik Nordstrom and Henrik Udd at Studio Fredman in Sweden and was mastered by Mika Jussila at Finnvox Studios in Finland.

The quest for a new record label ended when they signed with the Swedish label Ulterium Records and “No Turning Back” was released in 2010. This album was their best album at the time and helped them reach new horizons and widen their name even more.

While things seemed to be perfect in the INNERWISH camp, two member changes made the band postpone many of their plans. First their long-time drummer Terry Moros was replaced by Fragiskos Samoilis at the end of 2010. And then in 2011, their also long-time singer Babis Alexandropoulos had to leave in order to focus in his career as a tenor in classical singing. INNERWISH decided to not search for a new singer but to focus on the song-writing for their next album. After various obstacles in their way, finally in 2013, they announced their new singer George Eikosipentakis.

The first two samples of the new INNERWISH lineup were two cover songs the band made. The first one was BLACK SABBATH’s classic opus “Neon Knights” for a compilation put together by Metal Hammer Greece and the other one was WARLORD’s renown tune “Black Mass” for the compilation “Sons of a dream – A tribute to the Majesty of Warlord” which was released by Metal Breed Records USA.

After these two covers everything was set and the engines started working at full speed! After many months, sleepless nights and hard work, INNERWISH finally entered the Devasoundz Studios in Athens, Greece in August 2015 and started the recordings for their long-awaited fifth full-length album. The band trusted the famous duo of Fredrik Nordstrom and Henrik Udd at Studio Fredman in Sweden to do the mixing of the new album again. This time though, the mastering was done by the also famous Peter In De Betou at Tailor Made Production, also in Sweden.

The result is the best album the band has released so far. Simply entitled “InnerWish”, this fifth brainchild presents INNERWISH in the best phase of their musical career. With a solid like never before lineup, a fresh sound and a nice variety of songs, the album also includes some new elements, mixed together with the classic INNERWISH sound of course. Full of energy, power and emotion, this album is the appropriate way to describe what INNERWISH is all about. And that’s the reason why the album is simply called “InnerWish”. The album includes 13 songs that will grab you and despite its 67 minutes of total playing time, won’t bore you at all!

The cover of the album was created by no other than Felipe Machado Franco, while the design was done by the renown Jan Yrlund of Darkgrove Design.

Don’t miss out on one of the most diverse and powerful melodic metal releases of 2016!