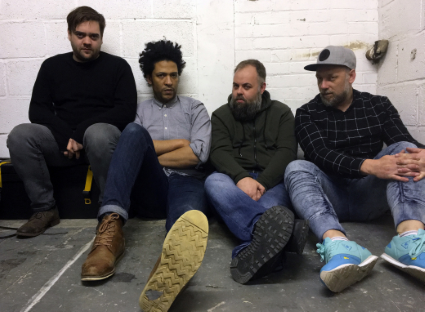 As soon as you listen to King Colobus, you can’t help but be pulled in.  They have an almost sinister beauty that proves to immerse and ignite. Officially formed in 2015, the first whispers of the band started several years beforehand, with lead vocalist Stewart MacPherson and bassist James Bailes, when they both lived in London. In between carrying out session work for a variety of established artists, they would collaborate on ideas and record demos for what they hoped would be a future project. By coincidence, they both relocated to Devon and recruited well-established Plymouth based musicians, guitarist Gavin Huck and drummer Simon Marsh. With a shared love for the bluesy riffage of Queens Of The Stone Age and Soundgarden, as well as the warm baritone vocal tones of Johnny Cash and Interpol, King Colobus offer a diverse musical pallet, coloured by an array of influences.Living and breathing their music is crucial to the four-piece, and as such, they are constantly writing and honing their craft. As well as basking in the writing process, the crew are extremely dedicated to playing live, having already shared stages with Sea Sick Steve, Band Of Skulls, De Staat, and Crazy Arm.

A genuinely refreshing take on the alternative rock genre, the relaunch of the band’s new self-titled EPis loaded with four scuzzy alt rock cuts that will twist and burrow itself deep into your cranium. Look out as the band widen the net and hit the road at the start of 2017.