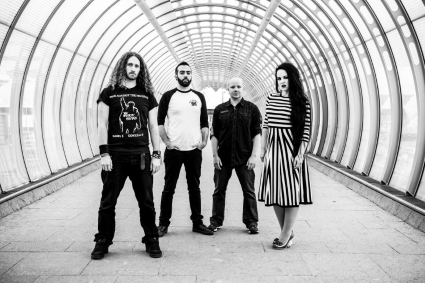 Kingbreaker is Spinky, Gabriel, Tom and Mikko, a new London-based band of metalheads from four different countries and two different hemispheres, drawn together by the need to play music, the desire to do something a little different, to create, to perform, to headbang, to rock.

Kingbreaker’s music began as a living room collaboration between Australian bassist Tom, and Portuguese guitarist Gabriel in 2013. They had been playing together in London band Cities Will Fall for a few years prior, and conceived of a new project during the terminal stages of Cities’ unfortunate demise.

Their many subsequent riff-packed, groovy jams were fruitful, and the results were funneled into arrangements sufficient to pique the interest of Finnish drummer Mikko, and Spinky, a vocalist from Hertfordshire and fellow member of Gabriel’s in The Mariana Hollow, who both joined in 2014.

Mikko’s precision, power, and rhythmic song-craft, together with Spinky’s truly unique and versatile voice, and evocative, enthralling lyrics and melodies, elevated the arrangements into songs distinct from and far beyond what Gabriel and Tom had first imagined. This new level of creativity and collaboration propelled Kingbreaker’s songwriting forward, and by summer 2015 they’d completed ten songs that would become their debut album.

Recorded and engineered by Jamie Dodd at Hackney’s Flesh & Bone Studios, To the Fire is an explosive, thunderous first effort, that energetically thrusts and bounces the listener along on an exploration of chugging riffs, venomous solos, crashing rhythms, and powerful, memorable choruses. It’s a journey that shifts with ease and grace from heaviness and aggression, to introspection and frailty. From darkness to colour. From beauty to ugliness and back again. And it will always, always leave you wanting more.

It’s Kingbreaker’s perfect arsenal as they set about playing on as many stages, and to as many people as they possibly can.