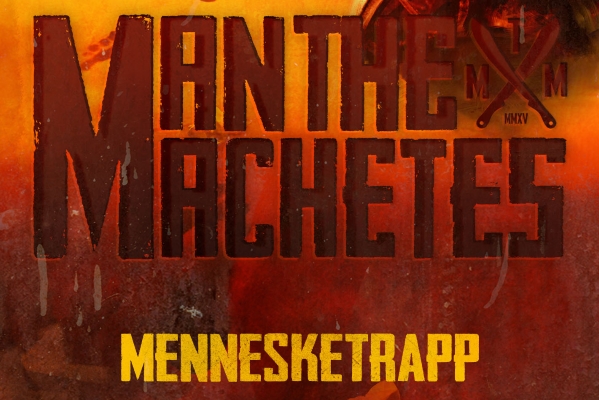 They have the speedy pace of punk, the riffs of rock and the melodies of pop music. Could this also be as hard as metal? The answer is a resounding “yes!” Say hello to Man the Machetes.

In a matter of two years, Man the Machetes has gone from playing small venues in their home country, Norway, to playing festivals like Pstereo and Hove, being awarded Ukas Urørt by the Norwegian radio broadcasters, NRK P3, and warming up for bands like Gallows and Kvelertak.

They started out as five friends in an old German bunker who wanted to play the music they loved. They soon started mixing elements of hardcore, Rock n’ Roll, metal and pop to create unique party tunes sparkling with energy. In August 2012, they took the next step, going to Toronto, Canada, to work with producer Eric Ratz on their upcoming album, scheduled for release in January 2013. The album was recorded during four intense weeks, seeing the band working like maniacs to do their songs justice on record. Eric Ratz has previously worked with bands like Billy Talent, Cancer Bats and Comeback Kid, and he provided the experience and skills needed to make it a truly great debut album.

The album presents music that balances delicately between an uncompromising, but accessible sound. The pace is high from the beginning to the very end, yet the listener is bombarded with melodies and catchy guitar riffs in a soundscape that is borderline rock and metal. If you add screaming vocals, a thumping, but melodic bass and intense drums, you are closing in on a good description of Man the Machetes’ debut album “Idiokrati”.

Live, the band has made itself heard, building a reputation as an energetic and dedicated bunch, always giving their best. The vocalist Christopher I. is often seen wriggling on the floor at the end of shows, screaming his guts out at everyday stupidity. Like the bloggers at Clashmusic write about their gig at Pstereo in 2011: “the chuncky guitars and growling vocals act like a magnetic force pulling the audience to the front of the small stage.”