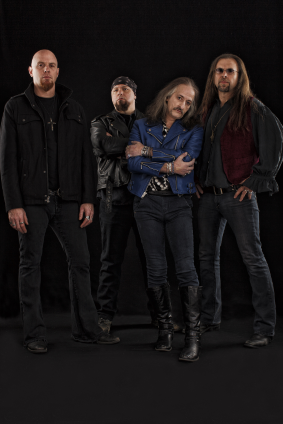 As the doom legends prepare their return, here’s just about everything you ever wanted to know

Along with the co-founders, the duo were joined by fellow DC musician’s Greg Mayne on bass and guitarist Vincent McAllister, and for a time, second guitarist Randy Palmer, also of Bedemon. During the first three years, Liebling would write dozens of songs. Many of these are now considered classics mostly thanks to Relapse Records “First Daze Here” collections.

These songs and more would be and continue to be resurrected and reanimated by Liebling and the legend of Pentagram over the next half decade. This would lead the world music press, in hindsight, to declare Pentagram not only one of the perfectors of hard rock, but also one of the innovators of a new genre called “heavy metal”. The band managed to release a few singles, 1972’s “Lazy Lady” (released as “Macabre”, not “Pentagram”.) 1973’s “Hurricane” and a cover of the Rolling Stones “Under My Thumb” in 1974. The singles didn’t go anywhere, Liebling’s personal demons began to fester during this time and this innovative line up played their last gig in 1976. Pentagram would then lay dormant until Liebling connected with Joe Hasselvander in 1978. Hasselvander was playing in a singer-less band consisting of himself (drums), Richard Kueht (guitar), Paul Trowbridge (guitar), and Marty Swaney (bass). Liebling soon joined and the group took on the Pentagram moniker as they began performing Liebling’s material that he had written years before. After playing several shows and releasing the 7″ single “Living in a Ram’s Head” in 1979, personal differences, once again fuelled by Liebling’s demons, doomed this line up to death by the end of the decade. In 1980, guitarist Victor Griffin and bassist Lee Abney had formed a band called DEATH ROW in Morristown, TN. Griffin then met Hasselvander, who was dating his sister, clicked with him musically and relocated his band to northern Virginia to jam with him. Needing a singer, Hasselvander suggested his old singer, Liebling.

After only one jam session together, it was obvious the magic was happening and Liebling joined as vocalist for Death Row. Former Pentagram member Martin Swaney soon replaced Lee Abney on bass and the classic Death Row line-up was formed. Struggling to find gigs outside of their area, and following demos recorded in 1982 and 1983, Hasselvander left the band. Local DC drummer Stuart Rose was chosen as his replacement.

The band signed with the unrelated Pentagram Records and after much debate, changed the band name from Death Row to Pentagram. The 82/83 Death Row demos, which had been packaged together under the title “All Your Sins,” was then released as the first official Pentagram album in 1985, simply re-titled titled “Pentagram”. Pentagram recorded and released their sophomore effort, “Day Of Reckoning”, on Napalm Records in 1987.

Following merely a handful of live shows, the band folded yet again in 1988. After the rigors of going nowhere, Griffin left for other personal and professional opportunities on the west coast. Liebling wouldn’t stay down however and the band reformed the following year with early 70s members Greg Mayne on bass and Randy Palmer on guitar. Liebling recruited locals Ted Feldman on guitar and Jon Cook on drums. The band was working towards recording a third album, but shortly after their first live performance, Pentagram found doom once again and imploded once again. Five more inactive years would pass as Liebling fell further into the dark abyss of the rock and roll lifestyle.

A light would come from across the sea in 1993 when Peaceville Records reached out to the band. The British record label would re-issue the band’s two albums, renaming the debut “Relentless” and giving the records their new, much-debated, uniformed, baphomet cover artwork. One of them, “Relentless” with silver ink, and the other, “Day of Reckoning” with gold ink. Feeling inspired, the “Death Row” line-up of Liebling, Griffin, Hasselvander, and Swaney reformed, gigged in the area and wrote a new album. “Be Forewarned” was released on Peaceville in 1994. Forever doomed of course, Swaney and Hasselvander once again quit left the band. Griffin’s nephew, Virginia musician Greg Turley joined on bass with local drummer Gary Isom taking the vacant drum throne.

Lasting until 1997, Pentagram re-entered the sub-basement as its members once again left Liebling. Unable to stay fully locked away, 1999 saw Pentagram re-emerge as a studio duo with Joe Hasselvander returning to his old friend’s side once again. Also at this time, Relapse Records a&r person, Sean “Pellet” Pelletier reached out to Liebling, reconnected his seventies bandmates and began compiling the lost studio and rehearsal songs which would become PENTAGRAM “First Daze Here”.

Meanwhile, in the studio, with Hasselvander on the instruments, and songs new and old living large, the pair recorded both 1999’s “Review Your Choices” and 2001’s “Sub-Basement” for Italy’s Black Widow Records. Although the cult of Pentagram was strong, all of its member’s weren’t, and after a failed attempt at a live gig on July 14th, 2001 at the Doomsday Festival in Towson, MD, Liebling once again found himself without a “band”. In 2004, Liebling recruited guitarist Kelly Carmichael and bassist Adam Heinzmann of Maryland based doom mainstays Internal Void along with Pittsburgh’s Mike Smail of Dream Death / Penance.

The new line-up recorded the half-baked “Show em How” album for Black Widow but, as history recounts, this line-up couldn’t survive Liebling’s ongoing turmoil. The band’s implosion was highlighted by the backstage overdose of Liebling in the winter of 2005 at the Black Cat club in Washington, DC. The end of that year saw the release of the second volume of seventies Pentagram songs via “First Daze Here Too” on Relapse Records. The LP was a co-release the next year on Relapse and Pelletier’s own Vessel Records. In September 2006, Pellet recruited Philadelphia’s 9/14 Pictures and started filming Liebling’s daily struggles as to what was to become the award-winning “Last Days Here” documentary.

In August of 2008, a new Pentagram lineup was announced which featured Liebling and locals Russ Strahan on guitar, Mark Ammen on bass as well as the return of drummer Gary Isom, who now had some underground success as part of the rock band Spirit Caravan. The Pinnacle of this line up was captured live by 9.14 Pictures at the band’s sold out, return to the stage at the historic, Webster Hall in NYC. It can now forever be seen as one of the climaxes experienced in “Last Days Here”. After a relatively successful string of shows throughout the US and Europe over the next year and a half, Russ Strahan abruptly left the band. Liebling took his drug-addled show on the road with a fill-in guitarist but this half-baked version of the band soon crumbled after an ill-fated US tour. Just prior to the start of a tour in May of 2010, Pentagram unexpectedly announced the return of guitarist Victor Griffin and bassist Greg Turley as touring members while Griffin’s Place of Skulls was on hiatus. Liebling couldn’t deny playing live and had reached out to his old bandmates to rejoin.

Only days into the first gigs, the magic of these old friends was captured live on video at the Maryland Death Fest. After an overwhelmingly positive reaction by fans and several successful appearances, Griffin and Turley rejoined as permanent members of Pentagram and, in November, signed a license deal with legendary Los Angeles label Metal Blade Records. The band enlisted Place of Skulls drummer Tim Tomaselli and began work on “Last Rites”, the first Pentagram album in seven years . The record came out in the spring of 2011 to glowing reviews. The year also marked the band’s 40th Anniversary.

To help celebrate, Metal Blade released the Maryland Deathfest performance as the dvd “When The Screams Come” and the band launched into several “40th Anniversary Party” concerts. One of which was at the South by Southwest festival in Austin, TX where the film about Liebling, “Last Days Here” was also debuting. The film was quickly sold to Sundance Selects / IFC and would travel the worldwide film festival circuit where it won several awards including “Best Music Documentary” at the International Documentary Film Festival in Amsterdam. Pentagram continued touring in Europe and the US throughout the remainder of 2011, including the band’s first-ever appearances in the UK. March 2012 saw the theatrical release of “Last Days Here” in the US with a US DVD release date that July; the film started streaming on Netflix that August as well as it being licensed by Showtime and The Movie Channel. Due to its popularity, all three outlets would end up renewing the film and extending its run. Tomaselli was unable to meet the band’s rigorous touring schedule and put in his notice.

After a long search, fan Sean Saley, best known for a stint with legendary DC punk band Government Issue, joined legendary fold. They continued to tour in the US, UK, and Europe over the remainder of the year, playing bigger shows and several major festivals, including Hellfest and Sweden Rock. By late in 2012, and with Place of Skulls idle, Victor Griffin had written and recorded several songs for a new project called In-Graved.

He announced he would leave Pentagram at the end of the year in order to finish the In-Graved album and tour behind it. The split was amicable and Griffin and the band agreed that they would likely work together again. Pentagram hired Philadelphia’s Matt Goldsborough to play guitar in Victor’s absence as they continued touring throughout 2013. Matt’s playing style and tone recalled that of early Pentagram guitarist Vincent McAllister. As a nod to that era of band, several 70s-era songs were performed for the first time in decades, including their first-ever live performances of the song “Be Forewarned”.

In January of 2014, Pentagram again surprised fans by simultaneously announcing the return of Victor Griffin to the band and a long awaited US West Coast tour. When not gigging live, the band started writing and rehearsing songs for a new album. The band was pleased to reignite their partnership with Peaceville Records which commenced with the release of a retrospective DVD entitled “All Your Sins – A Video Vault” featuring lost footage from the 80s all the way up to today’s active line up. This was followed by the announcement that the band’s new studio album, ‘Curious Volume’ would be released August 2015 on Peaceville.
www.facebook.com/PentagramUSA