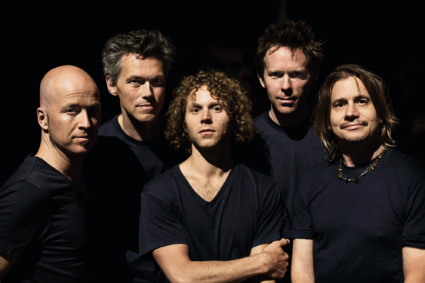 Ecologically minded prog band who have released one of the best Prog records this year. Featuring former Bruce Dickinson man on drums

It was Luley’s intention to create an album that honored the style and live musicality in traditional Prog rock mediums. Hurtgen, a fresh songwriter transplant to California via Nashville, TN, agreed and began writing sketches for a concept album based on author Suhail Rafidi’s novel, TJ & Tosc – its themes of transformation, self-identity, technology, and love in a post-apocalyptic world were a perfect fit with the music. Over the course of 2012 and 2013 Luley and Hurtgen composed and orchestrated the Perfect Beings Project.

With the help of drummer Dicki Fliszar, keyboardist Jesse Nason and bassist Chris Tristram, the five players began rehearsing the songs to record a live record in the same fashion as the Progressive Rock acts of the Golden Era. In April, 2013 with the help of engineer Julian David, the band recorded Perfect Beings in a span of three weeks at My Sonic Temple studio in Los Angeles.

Their single “Fictions” is here.