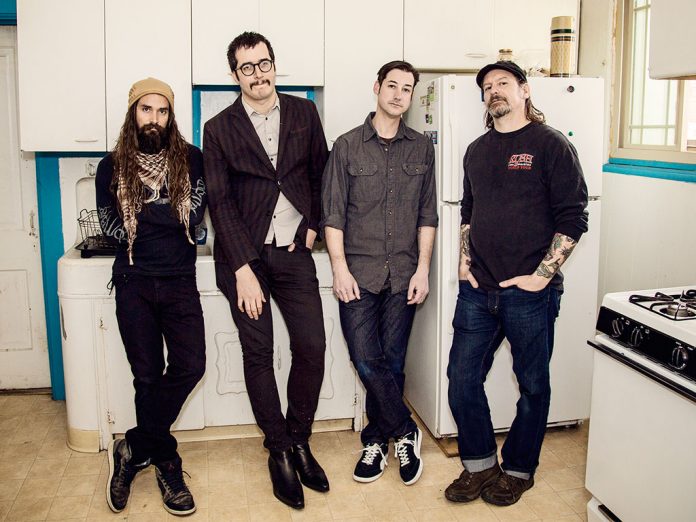 All star post punk troupe out to make a splash

PUBLICIST UK (featuring members of Municipal Waste, Revocation, Goes Cube, and Freshkills) forms a sound that blends elements of post-punk and new wave with metal and hardcore. The band formed in 2013 when guitarist David Obuchowski and Zachary Lipez (who had toured together with their bands Goes Cube and Freshkills respectively) began writing songs long distance; Obuchowski in Colorado, and Lipez in New York. Shortly thereafter, Obuchowski met up with his old friend and Revocation bassist Brett Bamberger (who’d he’d toured with when Brett was the bass player of East of the Wall). Obuchowski showed Bamberger the two songs he and Lipez had been working on, and Bamberger was in.

That same weekend, Bamberger went to Richmond, Virginia and paid a visit to his friend Dave Witte (Municipal Waste, ex-Burnt By The Sun). After hearing the songs, Witte immediately offered his talents, and was quickly welcomed into the fold. In the summer of 2014, the band posted a single demo, which saw instant coverage from Decibel Magazine, MetalSucks.net, and many others. Later that same summer, Noisey premiered another demo, and stated that, “unlimited beer, nudity, thick-cut bacon, and PUBLICIST UK are things that you need in your life!” The media attention, to say nothing of the supergroup’s innovative and dynamic take on post-punk, were more than enough to catch the eye of Relapse Records, who signed the band in the fall of 2014.

Following the band’s signing to Relapse, they headed to Wild Arctic Studios in Dover, NH to track their first full-length release, where they recorded with producer Dean Baltulonis (Goes Cube, The Hold Steady, Sick Of It All, Sheer Terror, and many others). Upon the album’s completion, PUBLICIST UK embarked upon a SXSW tour that included seven shows, and also appeared alongside Obituary, Pallbearer, Kylesa, and Corrosion Of Conformity at Dark Lord Day in Indiana. This past spring, Portland, OR-based boutique label Static Tension Recordings releasedPUBLICIST UK’s two demos as an exclusive Record Store Day 7-inch, setting the stage for the band’s hotly anticipated debut. PUBLICIST UK’s first album, Forgive Yourself, is a roaring 9-track genre-bender that proves that music doesn’t need to grind or blast to be heavy and dark.