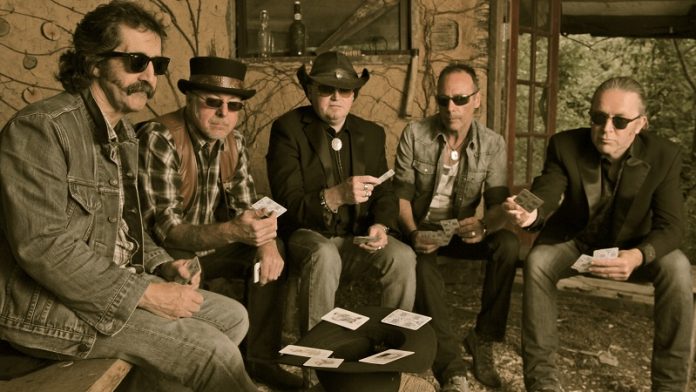 Ragged Union get to the heart of alternative country music and deliver it with passion, swagger and the power to drive their catchy choruses home.

They’ve carved a road of their own on the live circuit playing every bar, every club and every festival they can. Their Tom Petty/Blackberry Smoke/Georgia Satellites influences are worn on their embroidered sleeves but they add their own stamp to this heady mix and have created the Ragged Union sound … raw and powerful, sweet and melodic all at once.

Formed in Bristol UK in 2012, all 5 members had previously been in celebrated bands on the Bristol scene for years (Hunted, Barrellhouse, That Thang!, Kryptonite Junkies to name a few).  The mission was simple – quality classic Alternative and Rocking Country music with a touch of soul and a pinch of twang … and any original songs had better be good enough to fit in!

These days Ragged Union audiences find it hard to tell the original songs from the drop-dead classic covers – the songwriting is that good. “We just write from experience – life isn’t always easy but there are jewels to be found if you look hard enough. You might be down but it doesn’t mean you’re out …” explains front-man Andy Milsom. And they’re certainly not short of experience with each band member having honed their skills the hard way for decades. It shows too in the quality of musicianship, the confidence of performance and the brotherhood of the band. “… And we all love a back beat, great melody and catchy chorus”. Sure do – there’s a lot of dancing and singing-along at Ragged Union gigs.

2017 saw the release of debut album Voodoo Smile recorded at Bristol studios Room 4 and Ben Capp Sounds.  The band have a busy diary, are continually expanding their set with new songs and making new friends wherever they play.

Ragged Union is a band that lives and breathes the music they play. Call it Country-Rock, call it Alt-Country, call it Americana, call it what you will but their distinctive sound is that of a band that will leave you hungry for more.