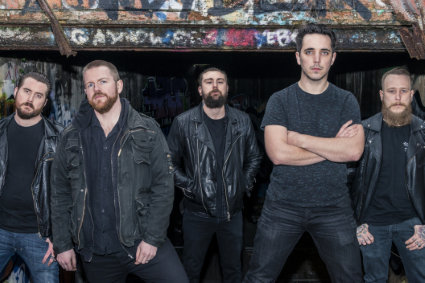 Originally hailing from all over the UK, but currently residing in Bath, Scout Killers have been burrowing away for the past five years shaping and honing their hugely captivating sound. Consisting of Scott Cox on vocals, Tom Graham-Hibbs serving up the groove on bass, Chris Phillips pounding on the drums, and Julien Morrez and Beau Stevens handling the guitars, the Scout Killers have toured relentlessly throughout the UK, playing alongside Fearless Vampire Killers, The Computers, F.O.E.S, and No Devotion. The Alternative rock crew have also wooed audiences at a host of festivals, as well as joining IDIVIDE on their UK Tour. Besides having a rampant appetite for touring, the band have released a debut self-titled album, a recent follow-up EP entitled Stand Your Ground, and the industrious quintet are now set to reveal their best work to date in the form of their brand new EP, Deception.

With such an expansive sound, it’s no wonder that the Scout Killers take from many quarters. Their influences range from Tom Morello’s work, through to Red Hot Chilli Peppers, Alter Bridge, and even Parkway Drive. The band’s forthcoming release Deception, charts the five-some’s growth and songwriting dexterity. The opener, Freak Show, is an ideal launch pad; bolted with blistering guitars and soaring vocals, this cut draws the listener in before the alluring flow and melodic brilliance of Keep Telling Me Lies underlines the band’s emerging supremacy. Let It All Go further cements and exemplifies just how the alt rockers have progressed and embellished on their already formidable sound. You Have It All signs off the EP in superb style with wrecking ball guitar work and a colossally rhythmic backbone.  With UK shows planned for the summer months and a host of European dates in the works, Scout Killers are primed to rise this year.