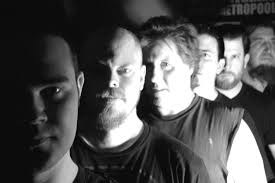 Recent signings to Metal Blade, new album dropping in a week or two, here’s all you need to know

SECRETS OF THE SKY formed in the Oakland, California area in 2010 and have spent that past half decade building a reputation as one of the finest underground metal acts. They’ve patiently and deliberately developed a unique sound that melds psychedelic, progressive atmospheres with heavy doom. With their live show, they work to create a mood and offer an experience, a true companion piece to their albums. SECRETS OF THE SKY‘s debut album, To Sail Black Waters was released on Kolony Records in 2013 and managed to find its way onto year end lists in Decibel Magazine and across the blogosphere: metalsucks.net, teethofthedivine.com, and more.

Half of 2013 was devoted to touring, and lead to a split with Godhunter. In 2014, two new tracks were recorded and released as part of the cleverly titled split: GH/OST:S. The cassette edition was unleashed during the SECRETS OF THE SKY and Godhunter tour that June, followed by a deluxe LP and digital release in September via The Compound/Battleground Records. To cap off 2014, the band performed as part of Southwest Terror Fest (Neurosis, Sunn O))), Pelican, Goatsnake, etc.), and Salt Lake City’s LuciFest. After the conclusion of their 2014 touring schedule, SECRETS OF THE SKY dedicated their time to writing and recording their sophomore effort, Pathway.

SECRETS OF THE SKY‘s Pathway will be officially unveiled on May 15th, 2015 via Metal Blade Records. For preorder bundles, scroll on over to: metalblade.com/secretsofthesky.