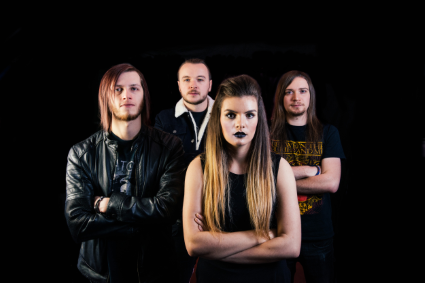 Striking glowing comparisons spanning from Periphery, Protest The Hero to Halestorm, Sertraline return with their sophomore EP Guilty. Packed with fierce riffs and passionate vocals, Guilty is sure to appease their current fan-base whilst winning over an army of new enthusiasts. The record drops on Friday 3rd March through all stores.

Sertraline were born in August 2014 and soon hit the ground running. The band’s debut single Set The World Alight landed at the end of that year and went on to pick up widespread radio airplay, including support from BBC Introducing. The northern metal crew followed the single with their acclaimed debut EP Bury The Ghosts, which arrived in the Spring of 2015 to an array of critical reviews. The industrious quartet continued their climb by supporting Butcher Babies, Toseland, Kobra and the Lotus, Skarlett Riot and Normandie, as well as hitting the nation’s highways to undertake their own headline tours. At the end of 2015, Sertraline had a change in personnel and spent most of 2016 working on freshening their sound and preparing for their next release. Now with a revitalised line-up and a stunning new EP in hand, entitled Guilty, the band are about to explode.

It’s hard not to get carried along by the allure and driveof the five tracks on the EP, as they are charged with depth and intensity. The colossal groove of the EP’s namesake, Guilty, soon pulls the lid off the record as it makes quite an entrance with its stout riffs and soaring melodic lines. Next up, Snakes balances engaging hooks with ample crushing riffery, all aided by sweeping and dynamic structuring. As the record moves on, their current single, Change Of Heart, lasts the senses with scatter gun riffs and evocatively layered vocals, swiftly followed by Nyeevise, which soars with a sing-a-long chorus and potent guitar work. I Admit The Blame closes the EP, and it’s an emotive cut that keenly highlights the band’s budding maturity and ever-growing prowess.

| Sertraline release ‘Guilty’ on Friday 3rd March and it can be pre-ordered at http://www.wearesertraline.bigcartel.com/ |