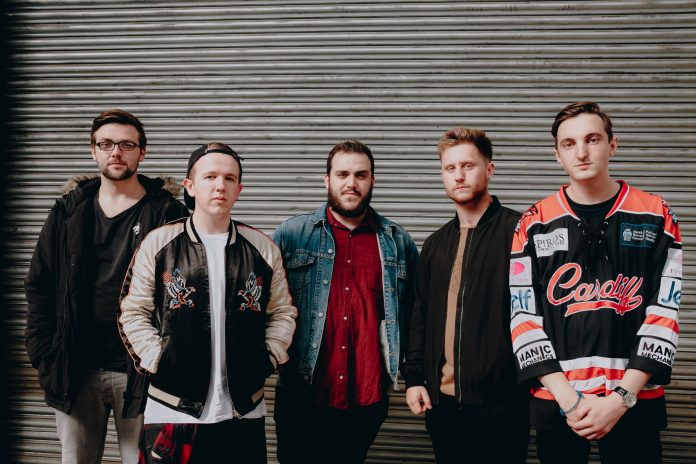 “Deadweight is based on the Greek myth of King Midas, who is given the power to turn everything to gold with a touch, which then backfires when he turns his daughter into gold. Our adaption of this focuses on struggles of mental health,”declares Seven Stories High vocalist Rhys Hyett-Ferrier of the quintet’s newly announced sophomore EP, continuing: “The artwork features a crown which symbolises power, wealth and status – which are supposed to make us happy. However, the title ‘Deadweight’ is juxtaposed to that, showing that sometimes the things that are supposed to make us happy are our heaviest burdens.”

Set for self-release on 24th November, pre-orders are available here and include an instant grat of lead single ‘Apathy‘.

Completed by Matt Davies and Charlie Porter on Guitar, Kallum Brain on Bass and Dave Bevan on Drums, the Swansea crew’s name came quite literally, explains Hyett-Ferrier: “We were on the seventh floor of the flat and wrote a lyric about bein, seven stories high. When we needed to finally name the band, the lyric became more than that; we realised that Dave, Matt and I had been in bands with six different singers, making this line-up the seventh ‘story’.” Intent on acting as a beacon of positivity, they explain: “The world is in a horrible place right now and we appreciate the important role art plays in holding a mirror up to the present, sparking conversation and positive change. We pour everything we have into our live shows and it makes our day jobs worth the grind.”

For Deadweight, the band recorded at Mwnci Studios in West Wales, rounded off with mixing and mastering by local technician Tom Williams. Sonically the band, who are influenced by State Champs, The Wonder Years and Four Year Strong, describe the release as “almost split in two – half follows a fast up-beat Pop Punk feel, which gets people dancing and jumping around. The other is heavier – fuller sounding and darker in feel, which you can chant and scream along to.” Yet, the EP flows as one piece of music, with each track written to fit the narrative, whilst being open enough to interpretation for listeners to make a personal connection. The band conclude: “We have all, either personally or through someone close to us, dealt with mental health and it was our hope that perhaps someone who was struggling would get something out of this.”