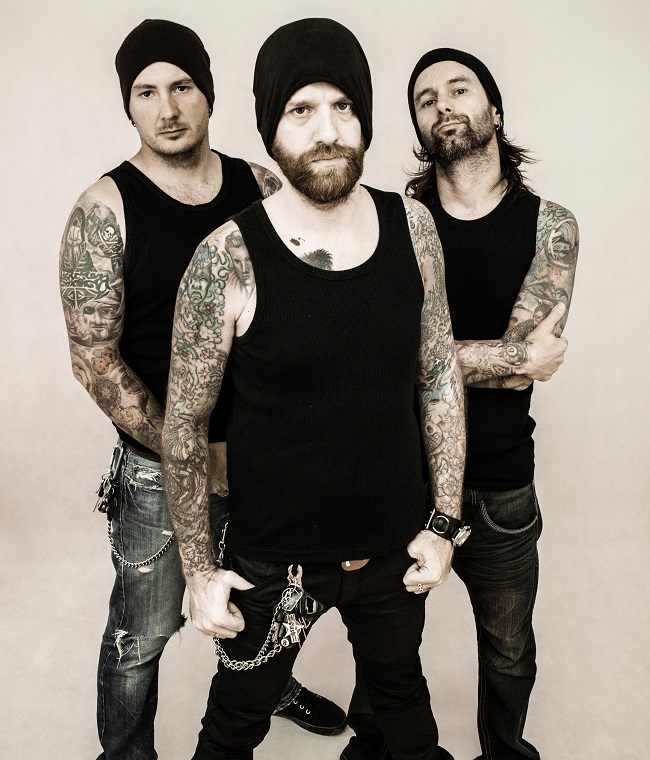 They’ve toured with Sebastian Bach, they’ve been Kory Clarke’s backing band. They are The Joystix and they are rollicking good fun

The band say: “The style of JOYSTIX best defined as punk/rock’n’roll. The main influences are such bands like Iggy and the Stooges,Ramones, New York dolls, and also the definitive bands of the Scandinavian rock scene like Backyard Babies, Danko Jones, Gluecifer, or The Hellacopters.”

The first record titled “Playin’ with Fire” was released in the autumn of 2006 by French indie label
Shotgun Generation Records/Active entertainment, and was distributed by PIAS in Europe.

This record got several positive reviews in several fanzines, music magazines all around the

continent. After the releasing of the record the band had the opportunity to play in countries such as Netherlands, Germany and Romania. In the same year the band shot a video clip to the song “Better Things To Do,” which was aired several times on the Hungarian music channel Viva..

In the beginning of 2007 the band got an offer from the French label Kicking records to record five songs and make a split record with the French band Flying Donuts. In the spring of 2007 the split record titled “This Machine Makes Loud Records” was released on Cd and also on Vinyl. During this time one of Hungary’s biggest labels made a deal with the band to distribute the record in Hungary.

Also in 2007 the American record label 272 Records gave the opportunity to the band to have one song in a compilation titled “Riot on Sunset vol.3” and also a few months later they released a split record together with the Australian band Mercy Kills. The record got the name “Suburban threat.”

In October of 2007 the band had a 3 week long European tour together with the bands Flying donuts and Safety first Gonzales. They played 20 gigs in 4 countries in this 3 weeks.

In May of 2008 the band has released the 2nd full length CD titled “And Joystix ForAll.”

The band say: “We set the goal to catch the energy of their live performances in this record. After the successful European tour the band was full of vitality and creative energy to capture the vibe and the power of their hard hitting rock ’n’ roll in their new record. With this 10 new songs we also wanted to show the world their musical diversity and dug way deep down to their roots of 1970’s R’n’R / Glam/Punk rock movement .”

In November 2008 the band had the chance to open to one of their biggest favorite the Backyard Babies in Budapest, and also they gained plenty of new fans with their rocking live performance.

In late 2009 the band went through some personal changes. Brownstone and the guys said goodbye to each other and two new members joined the band. Zoli Marton on bass and Andras Greff on guitar.

With this line-up the band’s toured in 2009 in several European countries and finished the year opening for Sebastian Bach as support band in Budapest. In 2010 February the band hit the studio to record a new five song EP titled “So Low City” and shot a video for the song “Behind Closed Doors” and toured all around Europe.

In 2011 the band invited one of their longtime favorite band The Bellrays to Budapest and playeda show together while they continuously toured in Hungary and Europe.

In the middle of 2011 the band started to work on a six song new EP titled “Wasted” which was released only online at the end of 2011.

After touring early 2012 the band and guitar player Andras Greff and Drummer Jimm parted ways and the band took a year long hiatus.

In 2013 Jimm came back and the band started to work together again, played in Hungary on a regular basis and did a few short European trip to France and Italy.

Early 2014 the band invited longtime favorite and idol Kory Clarke (Warrior Soul, ex- Trouble, Space age playboys) and did a show in Budapest with big success as Kory’s band for the night.

From the middle of 2014 the band started to work on a new material titled “Punchline” also parallel they shot two videos for the new record way before the release of the actual record.

The first video showed a different face of the band, the song “Dumb Man Blues” is a traditional delta blues influenced tune.

The recordings, and mixing of the new material started in July 2014 and finished in January 2015, the band recorded 12 new songs produced by Blondie. Say the group: “The goal was to create the summary of 10 years of experience and make a diverse record which shows the band’s punk/rock’n’roll/glam/blues influenced mixture in the best shape possible.

The record was released on 16th of February released by Shotgun Generation records France, and the band’s already booked for several Hungarian and European show through 2015.