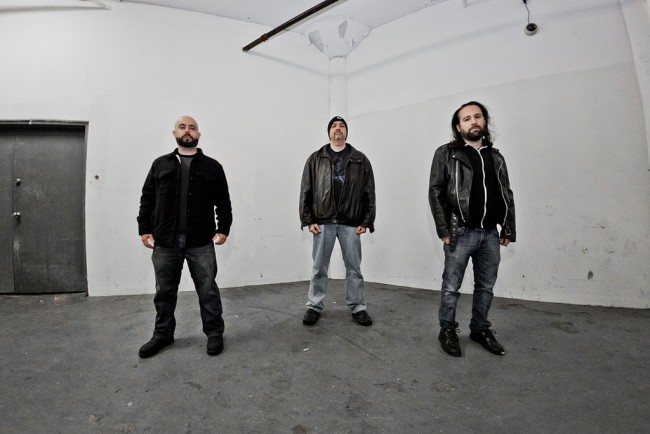 Their EP is out, just don’t mention drummers to them
Few bands deftly combine elements of metal, punk, indie, and prog like this Boston based trio. The kind of peaks and valleys which dot The Under’s music can only come from a strongly rooted artistic vision, sprung from the influence of innumerable acts. The fusion of intelligent guitar work, dizzying rhythms, and impassioned vocals provide an aural page-turner for intrepid listeners who seek substance in their music.
It was 2007 and singer/guitarist Dan Costa had been stumbling from drummer to drummer for four years alongside original bassist, Jason Walker.  The two gents had found each other through an online music ad four years earlier, in pursuit of making music that was both high energy and high minded.  However, finding a capable drummer who could keep up was proving to be a futile task.
The online music gods finally lent another hand and dropped drummer Randy Odierno into their lives. Formerly of two legendary outfits, Disrupt and Grief, Randy had the skill and the will to follow where Dan’s winding compositions might lead him. One jam and one quick band name conversation and they were off.
Unfortunately 2014 saw Jason having to step away after two releases and many gigs played. However, with a timely move to Boston from New York, new bassist and old friend Ben Sternbaum was looking to lend his keen bass playing sensibilities to a new project. After a few jams, Ben officially joined the fold and helped finish the second EP, which the band had already started to record. While working to promote its latest offering, The Under continues to write new music and forging strong musical bonds with its newest member.
Official Website: www.theunderband.com
Facebook: www.facebook.com/theunderband
Twitter: twitter.com/TheUnder_band