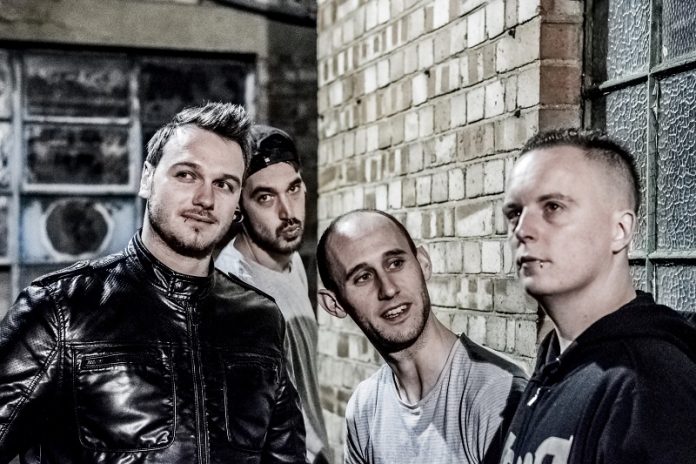 Brit tunesters ‘All Tied Up’ surge ahead with the release of their engulfing new EP ‘Breaking Silence’, which lands via Stack-in-a-box Records on Friday 22nd September.

UK nu-wave pop-punk outfit ALL TIED UP dispatch thumping power-pop thrusts and melodic hooks that conjure up comparisons to All Time Lowand A Day To Remember, as well as heavyweight luminaries such as blink-182 and Green Day.

Hailing from the concrete city of Milton Keynes, ALL TIED UP are comprised of Dave Palfreyman (Vocals/Guitar), Billy Norman (Lead/Rhythm Guitars) Nick Freeman (Drums/Percussion), and Leebo (Bass Guitar). The quartet have widely played throughout the UK, and in turn, have racked up notable supports with The Ataris, [SPUNGE],Kenneths, Big D and the Kids Table, Whitmore and Sonic Boom Six. Although ALL TIED UPdraw from American influences, the band have a distinctly British sound, and this is consciously reflected in both the production and with Palfreyman’s “heart on sleeve” northern vocal delivery.

To date, the rising pop-punkers have released an album and two EPs, all of which have assisted with the band’s growth and reach. After recently being snapped up by new indie label, Stack-in-a-box Records, the four-piece are now primed for national attention with the release of their new EP, Breaking Silence, which arrives this September. Recorded by up-and-coming Welsh producer, Andy Davies, and part mastered by Grammy award-winning engineer Joe LaPorta (David Bowie, Foo Fighters, Mallory Knox) and Katie Tavini (Sonic Boom Six), the record is loaded with engaging guitar lines and melody drenched choruses that are utterly contagious. From the mesmerising new single, So Enthusiastic, to the enormously tuneful, Better Day, ALL TIED UP have crafted a record awash with killer hooks and buoyant vigor. The band will hit the road to support the record; so stay glued to their social sites for announcements.