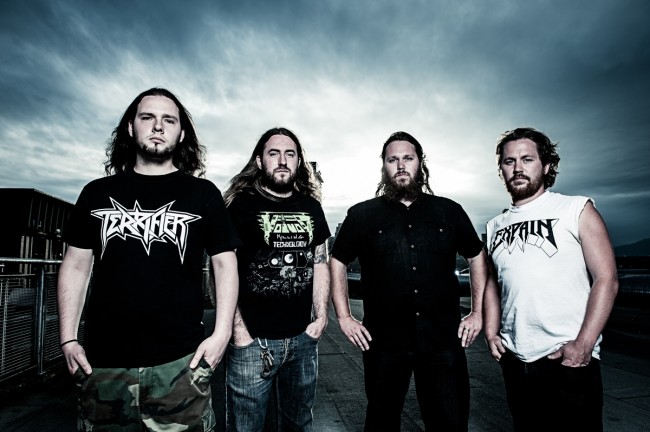 This Canadian thrash band sound pretty cool to us, so here’s their story

A Vancouver born Modern Thrash outfit. Titan’s Eve formed in 2008 by brothers Brian and Kyle Gamblin, with Casey Ory on Drums and later joined by Jesse Hord on bass. From day one the band has written the tunes they want to hear, and taken charge of their musical ambitions on their own terms. The early days saw the 4 piece defining their sound and making fans in their home city.

2009/2010 featured their emergence on the Canadian metal scene and the beginning of a strong fan base. They embarked on their first western Canadian tour and gave Canadians a real live taste of their sound. While gaining support and honing their music they ventured into a local studio with the talented Curt Wells. Their first album “The Divine Equal” was later mixed and mastered by Sacha Laskow of Calgary Tech-metal band Divinity. With the release and critical acclaim the album received, their first Cross-Canadian tour followed exposing even more to their unique brand of thrash metal.

2011 saw “The Divine Equal released to a bigger audience, with a 2 month self booked tour of North America. Titan’s Eve had the pleasure to play in front of crazed metal fans all over the United States. 2012 started with a bang with their first arena show and fulfilling a dream of playing with Nu-metal leaders Korn. Fresh of the success from their debut, Titan’s Eve began creating the follow up, “Life Apocalypse”. “This album was written faster and was more of an aggressive attempt at writing and recording an album,” says guitarist Kyle Gamblin. “We hammered out the songs and bunkered down to record in Calgary with Sacha Laskow for a month and recorded every day.”

Taking a turn from their debut, which was released a year previously, but staying true to their personal interpretations of honest, powerful modern metal, “the result, Life Apocalypse, shows our efforts and captures the best performances from all four members of our band. We worked very hard to deliver something that wouldn’t disappoint fans of our last album,” says Brian Gamblin.

Following the release of Life Apocalypse that summer, Titans Eve took the “Titan Train” (i.e. their 2007 Ford E-350 van) and traveled across Western Canada, bringing their music to as great an audience as possible, supporting Canadian metal heavyweights Anvil followed by a tour with super-group Kill Devil Hill featuring Rex Brown of Pantera. After these incredible tours, they’re biggest venture yet came into focus with an invite to be a support act on the Arch Enemy European Khaos tour. This saw their first tour in Europe, playing to the receptive and enthusiastic European metal crowds.

2013-14 had been used for writing and recording their third album, with breaks from the rehearsals by touring Western Canada, playing music festivals and opening for the likes of Diamoned Head, Raven and Soulfly. The album was recorded in Vancouver’s legendary Warehouse Studio with renowned producer and engineer Eric Mosher. The mastering was completed by Canadian metal hero Jeff Waters of Annihilator.