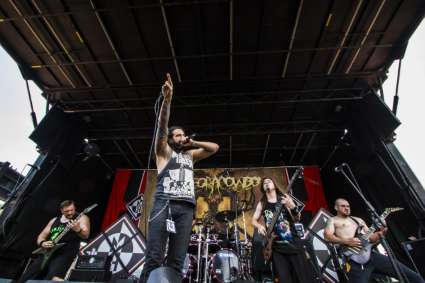 Deathcore pioneers ate the sun last year. Here, they give us the skinny

Sun Eater“, the fourth offering from Job for a Cowboy, is an aural achievement that is poised to stand as the band’s definitive statement. Along with producer Jason Suecof, vocalist Jonny Davy, guitarists Al Glassman and Tony Sannicandro, bassist Nick Schendzielos, and session drummer Danny Walker have crafted a cerebral and accomplished piece of technical death metal.

Job for a Cowboy‘s recording lineup is a musical caliber of the highest order, with songwriting to match. This is made apparent in the solo passages in “The Synthetic Sea,” “The Stone Cross,” and the encumbering weight and unrelenting groove of “Eating the Visions of God” and “Worming Nightfall.” This is a band that, through time and lineup changes, has emerged as death metal cognoscentes, however divisive their music or moniker may be.

Job for a Cowboy wrapped up touring in 2013 as part of the Rockstar Energy Drink Mayhem Festival that summer. Following that performance, the band collectively decided to sharpen their focus and set an intent on cooking up a record that encompassed their full dynamic range of talent. The group had all agreed on the main course being a desire for futuristic tones, a wider spectrum of textures and tempos, and an emphasis on slightly more ancestral song construction. The result, “Sun Eater,” does not just sound like a new record, it sounds like an entirely new band.

Following the departure of long time skins-man Jon Rice, Job for a Cowboy, cognizant of the size of shoes that needed to be filled, in addition to the depth and versatility demanded by the new material, enlisted the services of Danny Walker (Intronaut, Murder Construct, Exhumed, etc). Walker’s mastery of his craft, coupled with his creativity and enthusiasm for the material, strongly influenced the outcome of the record, and it only takes a few minutes of listening to hear this is Job for a Cowboy at their finest.

Regarding composition, guitarist Tony Sannicandro recalled: “This album came together very smoothly. We had the concept before hand and I took it upon myself to try and portray that concept through the music. I took a much more melodic approach than “Demonocracy“: focusing on the structuring and the layering that would complement the story to my ears.” The other half of the guitar duo, Al Glassman, continued to be a driving force behind the band’s sound. Bassist Nick Schendzielos added that “Al riffs long and hard for greater the good of everyone involved. He really used a lot of foresight in his revisions during the writing process, creating ample room for me to mood-out the tracks with bass that you can actually hear. in the end I think we really brought the character out in each and every song.” Indeed, composition and songwriting was the focus here. With this new album, the band had the luxury of relative longevity in the core of their songwriting lineup. This led to a far stronger vibe and a much more realized final product.

Audiohammer producer Jason Suecof, whose first bout with the band was 2009’s “Ruination,” has now worked with the band for over six years. Few are more familiar with how Job for a Cowboy operates in the studio than Suecof, and he was also feeling the “vibe” on “Sun Eater“: “This band is composed entirely of top notch musicians all the way around and they are clearly at the top of their game. This new album is a stellar combination of everyone’s efforts and what we have now is something that conveys everyone’s musicianship without being techy for the sake of being tech. This album has got feeling and it is fucking brutal!”

Lyrically and vocally, Jonny Davy continues to be one of the most visceral and through provoking throats in the business. His delivery on “Sun Eater” may very well be his most passionate to date. Schendzielos adds: “Jonny’s signature pig squeals may be all but retired, but that doesn’t stop this beast of a man from throating out his most primal and disgustingly powerful vocalizations yet!”

Given any band’s career arc, especially when leading up to the release of a new album, it’s clearly cliché to call that record a pinnacle or apex, but it’s apparent that Job for a Cowboy have reached a summit. “Sun Eater” stands to serve as their ultimate album.