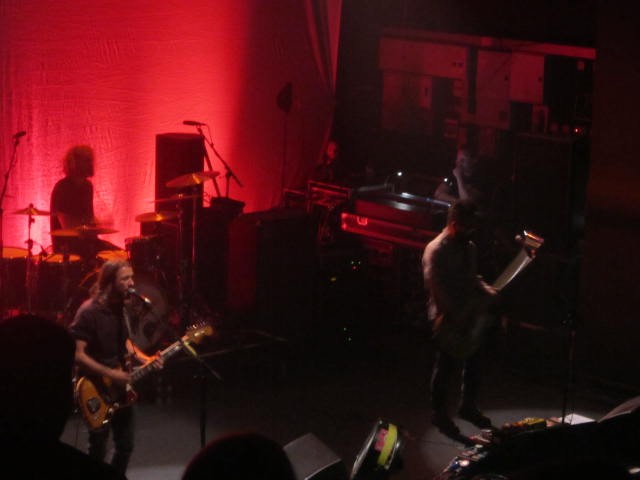 Earlier in the year MV was there to witness an incendiary display The Virginmary’s at Stone Free Festival. Now afforded just a little more time, they set about winning another wet of new fans. Such a thing isn’t in doubt, given the quality of songs like “Halo In Her Silhouette” and “For You My Love”. The trio are as thoroughly decent as can be and deserve every success they get, that though, doesn’t alter the fact that singer Ally is wearing a garish anorak throughout the set. Maybe there was a leak in the roof, whatever the explanation the fact that they have in “Motherless Land” managed to get themselves a genuine, copper bottomed anthem. In addition, there is a glorious nihilism about “Free To Do Whatever They Say”. Both of these are on the new album, but earlier material like “Dead Man’s Shoes” and the closing “Just A Ride” – one of many that touches on the darker side of small town life – is now so road tested and tight that the only conclusion to come to is that The Virginmary’s are through their apprenticeship and ready for the big leagues.

It’s interesting that it takes Feeder about half an hour to play anything from their earlier catalogue, but even more prescient is what Grant Nicholas – singer, songwriter and guitarist with the band for twenty odd years – says before they play “High”. “We are gonna take you back to the earlymid 90s” he reckons. “To our first album, and a time when people bought records, radio played music and music was just ….better”.

He explains that he means the industry, but the point is clearly a sore one given that he returns to it a couple more times in the 90 minutes the band are onstage. Perhaps explaining why they went away for four years before reforming to play these shows and make a record.

That new album is out on Friday, and the now five piece are clearly proud of it as they play a decent smattering from it – “Eskimo” probably the most immediately impressive – and they deserve credit for eschewing the path many bands would have gone down and playing a classic album show, say and doing all of “Polythene” from start to finish.

Instead they dip in and out things, giving something to everyone. Personal choice dictates that MV always preferred Feeder back in the day when they just went for it, and there’s a visceral nature to the throbbing “Lost And Found” that isn’t always elsewhere.

When they let their hair down and leave the lush soundscapes of Coldplay behind Feeder are as formidable as ever. “Borders” – a late change to the set – is superb and then there’s the hits. And by crikey when you look back at it, there were lots of them. Big ones too. Like “Insomnia” like “Come Back Around”, “Just The Way I’m Feeling” and the one you might remember about brand new cars with a cd  player, player, player – and they are all lapped up by the near sell out 3000 crowd

How do you follow that? Probably not with a rather low-key new track “Infrared-Ultraviolet” which begins the encore, far better are “Seven Days In The Sun” and a downright glorious “Just A Day” which engenders a proper circle pit.

This is a brave comeback from a band who never shied away from doing what was right. “If you all bought the album, you’d put us in the top 20,” Nicholas had suggested earlier in the evening. They probably need to aim higher. Feeder are back and doing it their way.