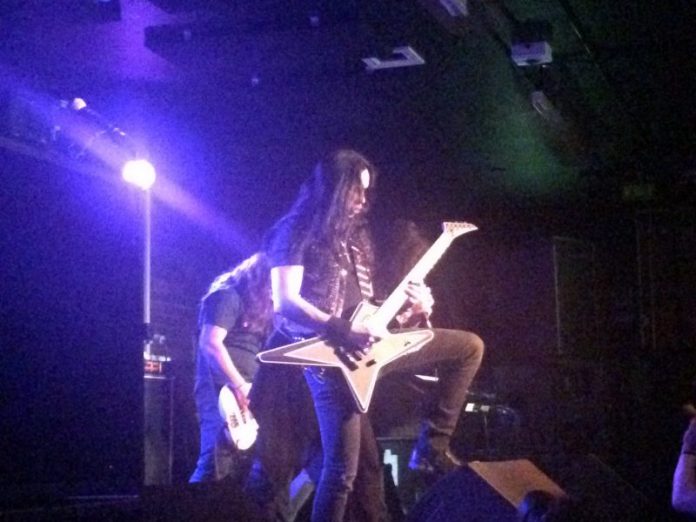 Holding onto the belief that heavy metal began in the West Midlands and that it damn well belongs here still, come Wolverhampton stalwarts Vicious Nature. A little more aggressive and a perhaps a tad more groove orientated than some of their peers, “Fight For Your Life” cheerfully would scrap you outside in the street. New tune “Rise Up” – not about Tony Blair’s anti referendum speech yesterday as singer Andy Pyke is at great pains to point out – is cut from the same cloth and is just as entertaining. Fists clenched and teeth gritted Viscous Nature are still swinging for the underdogs.

Making their first visit here are Greece’s Scar Of The Sun, and the self styled modern metallers are evidently in the mood to make up for lost time. Staying just the right side of growling that spoils so many of their most obvious influences, the band are tight as you like. A good helping of their new album “In Flood” is involved, with “Among” and “Truth” particularly impressive. These are coupled with a few from their debut and the closing “Gravity” finds its range. Singer Terry – who looks as though he’s particularly enjoyed himself – suggests they’d like to come back soon and notwithstanding the difficulties of economics for bands these days and the fiscal climate back home in general which no doubt makes it hard, they’d be welcome.

They might be wearing make up like some death metal band and their singer Sam Nyman might spend the last song,”Irresistible”, extricating himself from a straitjacket like an Alice Cooper tribute act, but elsewhere Manimal have a pretty conventional metal attack. Like power metal would sound if Judas Priest did it, Nyman boasts an incredible range and the band have some fine songs to complement his voice. It appears “Psychopomp” isn’t just the name of one their songs but seemingly their mission. “The Dark” is a fists in the air anthem, “Human Condition” has some impressive guitar from Henrik Stenroos and just the right level of bombast. Resolutely metal throughout Manimal are clearly familiar with the music of this area, but are more than adept at keeping that flame burning. With both horns up.

There’s a moment towards the end of the Firewind set where it all makes sense. The band are tearing into “The Fire And The Fury” and Gus G, just because he can, plays his guitar behind his head and you realise that they have a total command of everything they touch. Indeed, for a band that has had quite so many line up changes, this current bunch has remained relatively stable – it is only singer Henning Basse that is making his debut with the band here.

This version of  Firewind, just about a month ago, stuck out what it is very possibly the album of the year so far in “Immortals” and this website proclaimed that they might just be the best power metal band on the planet.

Given the setlist contains nearly all of the album it’s fair to say that everyone concerned realises just how how good it is, and so on top of their game are the band here that we stick by our assertion as to their abilities too.

Put simply, Firewind are astonishingly good. Opening with the brilliant “Ode To Leonadias” is a masterstroke and following it with “We Defy” is an early clue as to what type of show this will be. That said, Firewind are savvy enough to make sure that all their albums are represented, and there is a real feeling that this is something that has been really planned to make it work perfectly.

Indeed, it is one of the older songs that provides one of the real highlights. “Between Heaven And Hell” sees some mighty twin guitar riffing from mainman G – surely one of the most talented guitarists there is – and multi-instrumental Bob Katsionis, who plays keyboards here too.

But more than anything tonight is about the new stuff. Cuts like the heavy “War Of Ages” and the mighty balladry of “Lady Of 1000 Sorrows”. To that end there has to be a special word for Basse. Apollo Papathanasio is tough to follow, but he does it brilliantly here, and is very much a frontman in the classic mould.

A lengthy set sees a three song encore.  “Live And Die By The Sword” is magnificent, but the classic “Falling To Pieces” is welcomed like a long-lost friend.

That one might end the night, but in many ways the whole vibe is summed up by a song halfway through. Naturally it comes from a track on the new record. It proclaims, gleefully, that they are “Back On The Throne”. Which is just fine. They are Firewind, and they are the kings.