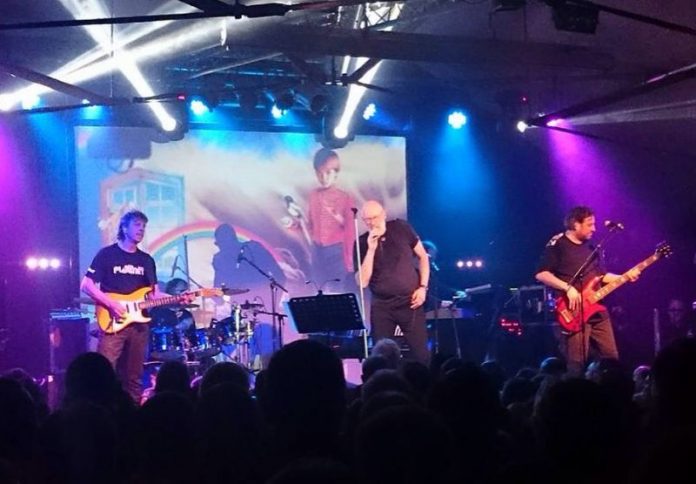 You always know you are in for a major night at the Bilston Robin when car parking is tricky, once we had finally found a spot for the car we made our way to the venue…..stopping only to shake hands with the headline act (Fish has been a guest on my show on many occasions so it was nice to see him once again) before joining the queue to get in.
It was always going to be a special evening for the crowd due to this being the last night of the tour and it was also the last time that 1985 mega selling album ‘Misplaced Childhood’ was to be played in full…..needless to say there was an immense buzz around the place.
Fish and his fine band of minstrels sauntered onto the stage bang on 8.30pm for what was to be an evening never to forget…..’Pipeline’ and ‘Feast Of Consequences’ opened the show and it was obvious that the crowd were ready to sing every word with the legendary frontman.
‘Long Cold Day’ & ‘Family Business’ were next on the setlist before Fish recanted a lengthy tale about a tour in Sarajevo in 1996 which obviously struck a note with him and led him to write the brilliant and spine tingling if not exactly radio friendly ‘The Legend Of Johnny Punter’ (I made the mistake once of airing the uncut version…..oops!!!)
Then it was the moment we had been waiting for……Marillion fans both young and old (having bought my first Marillion record back in early 1983…..I fit firmly into the old) felt the goosebumps rocket to the surface as the opening strains of ‘Pseudo Silk Kimono’ filled the room……sheer magic!!!
Tracks like ‘Kayleigh’ & ‘Lavender’ which have been hijacked by listeners of pop fluff radio stations over the last 30 years and included on more soft rock compilations than I care to remember are superb tracks on their own but when included in the full unabridged version of ‘Misplaced Childhood’ they have an air of majesty about them…..on more than one occasion I glanced around the crowd to see 40-50 year olds with a tear in their eye….this album means that much to so many.
The highlight of ‘Misplaced Childhood’ for me and has been since day one is the glorious ‘Heart Of Lothian’……it always leaves me with a lump in my throat the size of a match play snooker ball…..lord knows what it must do to a native Scotsman who grew up in Edinburgh…..I love this song so much I just can’t explain it in one gig review……buy me a pint or three one night and I’ll tell you in more detail.
The rest of the ‘Misplaced Childhood’ album was delivered in such style and with so much energy that you swear you had been transported back to the summer of 1985…..you could see how much the album meant to him back then and still means to Fish….and as he kept staring into the crowd with amazement of how loud and passionately the lyrics were delivered back to him by the audience he knew that the Bilston Robin was the perfect resting place for this landmark albums final outing.
The encores at this evenings show were Marillion’s landmark debut single ‘Market Square Heroes’ which always goes down as well as an ice cold Guinness on a hot summers day and the brilliant ‘The Company’ for which Fish brought out his long time road companion Yatta for an impromptu sing along……wow……what an evening!!!!!
Fish said at the end that in years to come…..thousands would claim they were here…..but we know that us very lucky 700 ‘Johnny Punters’ had just witnessed something very special…..the big man will be back next year with a brand new album ‘Wieltschmertz’ and a 30th anniversary ‘Clutching At Straws’ tour…..and I guarantee I will be there……make sure you are too!!!!
Garry Foster
Unchained: Tuesday’s 10pm-Midnight
Prog Rock Files: Thursday’s 10pm-Midnight
101.8WCR FM and online at www.wcrfm.com