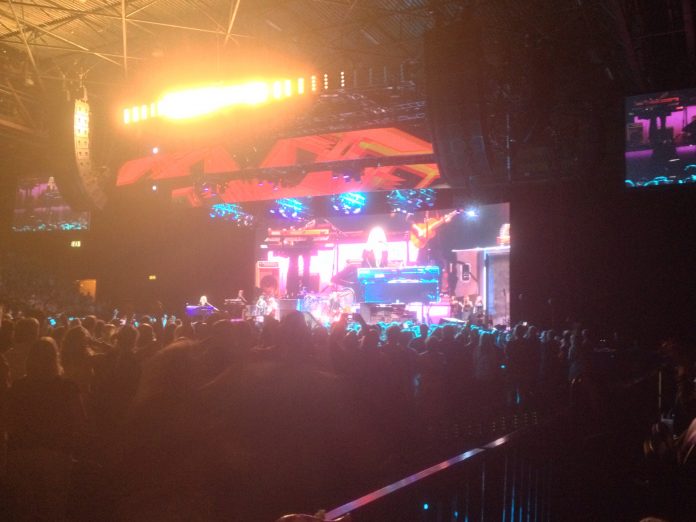 As he’s been the guitarist in Fleetwood Mac for 40 years off and on, Lindsay Buckingham knows what he’s saying is an understatement: “The thing is with this band, as people,” he pauses. “We’ve had some ups and downs over the years…..”

Now is not the time or place to go through all of them, either. There simply isn’t room to talk about the legendary history of this legendary band, who started as one thing, became another and are now, probably, something else entirely. Now is the time to look to the future – or at the very least, the present.

Quite simply, last year when it was announced that Christine McVie was back in the band, Mac they were reuniting for some shows, many doubted it would happen, but here we are on – as Stevie Nicks is fond of telling us – the 99th show of the appropriately named “On With The Show” and, my how the public have responded.

There is not a seat to be had at 8.15 precisely, when the lights dim and the five men and women that make up this band – plus the five men and women who add to their live sound – receive their heroes welcome, and what follows, is for the next two and a half hours a compelling lesson to all mere wannabe bands on exactly how this should be done.

The night includes a healthy dose of anthems. Let’s be fair, you don’t sell 140 million records worldwide unless you can write a tune, and it begins with “The Chain” which always strikes as kind of “Layla” in reverse. That is to say, it’s the got the bit everyone knows at the end. Whatever, it’s a striking and superb opener. And as it veers from chilled out and blissful to all-out rock, it is a very neat segue into the world of Fleetwood Mac.

There’s not many bands with the variety on display here. “Dreams” is followed by a superb “Second Hand News” and that’s far from the only time the evening does exactly what it wants to.

A show that isn’t afraid of getting good and psychedelic when it wants to, gets downright experimental on the brilliant “Tusk” which is very much a highlight and “Gold Dust Woman” allows Nicks, who is a mesmerising presence throughout, to explore her mystic sound.

Although all the band are given their chance to shine – Mick Fleetwood in particular with a predictably OTT drum solo – and the musicianship first class throughout, the trump card in this very considerable pack is Buckingham, who is little short of magnificent all evening. His acoustic rendition of “Big Love” is only surpassed by his incredible work on “I’m So Afraid” and he looks to be genuinely thrilled at the chance to play these songs again, as the very clever use of film during the show is quick to pick out.

The video screens are a real feature here and the display has clearly been thought of. Whether animation, short sequences or just the band themselves, it adds to both the spectacle and the depth of the performance.

But clearly it’s mostly about the songs, and when it comes time to bring out the big guns, then Fleetwood Mac aren’t firing blanks. “Everywhere” shimmers, “Lies” is the 1980s radio Classic it always was, and the main set closes with a party atmosphere of “Go Your Own Way.”

“Don’t Stop” and it’s big ol’ chorus and it’s big ol’ message of hope (used by Bill Clinton as an election song in 1992 no less) is saved for the first encore, while a stripped back “Songbird” with just McVie and her piano before Buckingham joins her by the end, serves as the second and acts as the closer.

It’s not rocket science. You don’t fill arenas all over the world, you don’t sell this many records, and you don’t get this response when you return to the fray, unless your music connects with the public on whatever level they choose. Moreover you don’t keep people coming back for over 40 years unless you know what you are doing. Fleetwood Mac eloquently make these points tonight and answer any questions that were perhaps remaining with ease. To pinch Lindsay’s line, tonight was very much an up rather than a down.