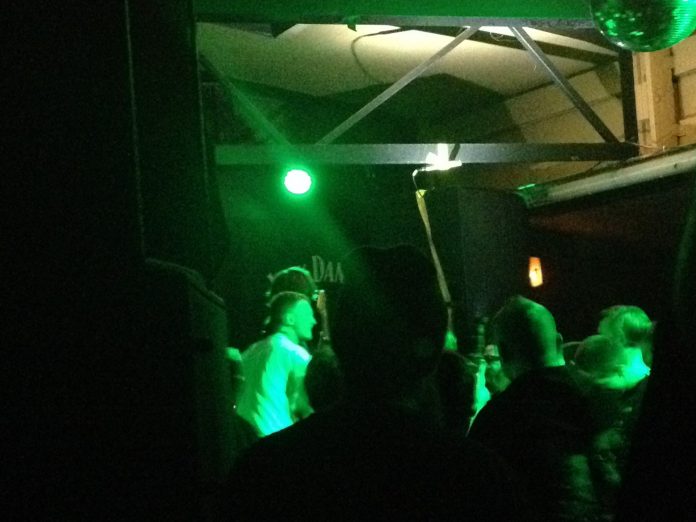 You can search around for any adjective you like for Loom and you still come back to “blimey.” To say their performance is dominated by the frontman Tarik is a little like saying that Iron Maiden are a bit good. At various points he swings from beams, pushes audience members, throws things and seems ready to fight his own band. It’s striking, it’s jarring and it’s a little unsettling. But my, it’s compelling. The Leamington band have just released a new single and “Hate” – like the rest on show here, is like a mix of old skool punk (even down to the disaffected stare) and Every Time I Die at their most brutal. They even chuck in a cover of GG Allin at one point and if that doesn’t sum things up then nothing will. As that reworking of “Bite It You Scum” Tarik appears ready to blow. Frightening? You bet. Entertaining, hell yeah!

A more than healthy crowd is in the room by the time Bristol’s Milk Teeth arrive. They are more conventional, but then anything is. Their male/female sound is largely based around the same angular noise as “In Utero.” Co- frontperson Josh might not be comfortable, as he puts it, playing the “rock guy” but songs like “Linda” – from their “Sad Sack EP” – mean he might have to learn. It’s screeching, desperate tones are a highlight. They’ve a nice line in bass groove too, courtesy of the other singer Becky and the quietest number they play, “Bagels” shows their versatility. “Mellon Blade” is bouncier and with closing number “Trampoline” really hitting home, Milk Teeth impress throughout.

As Frank Carter And The Rattlesnakes walk onto the stage there’s a moment of calm. “I have three things to say” says Frank. “One, thanks for coming to see a band with three songs out, I’d never have fucking done that. Two. Do whatever the fuck you want, my stage is your stage. And three. It’s good to be back…..”

With that, all kinds of hell is unleashed.

That’s pretty easy to easy to answer, based on an airing of their recent single “Fangs” alone. Frank Carter has his mojo back and then some.

The quiet, sometimes jovial, sometimes serious guy between songs is at odds with the snarling beast, who’s veins are popping out of his head that he becomes when he sings, clearly passionate about a number of issues he is happy using his music as a vehicle for what he wants to say, pointedly dedicating “Trouble” to the “fucking Tories.” He feels rough, he explains, before the incredible spectacle of the aforementioned “Fangs,” during which he leaps from a speaker stack straight into the crowd.

He looks every inch a man reborn. Clearly, sacking his manager and Booking Agent has led to him having the time of his life as the early songs slam in the way that only very, very angry hardcore punk can.

“Devil Inside” is a touch slower and sees Carter sing in a more melodic way, before a monstrous middle section kicks in. “Loss” is a tender moment, written after his daughter was born, but that’s nothing compared to “Beautiful Death” which sees Carter get genuinely emotional.

“Primary Explosive” is snotty, sneering and pure punk fun to boot, “Paradise” is all of those things and more as it is just about the most vicious social commentary imaginable as it takes suicide bombers to task.

He evidently loves “Fangs” so much he plays it again, before a show that was incredible in many different ways ends with the absolute vitriolic blues of “I Hate You.” Which includes getting the audience to sing “I hate you and I wish you would die,” they do. With relish.

Carter ends with cuts and bruises. Do you think he cares? Put it this way, at one point in the set he says: “At 31 years old, these shows are hurting me in new ways, but I fucking love this tour and I fucking love this band.” Tonight Birmingham seemed to concur. Only one thought remains. If this was Frank Carter when he’s poorly, then Lord help us when he’s at full speed.