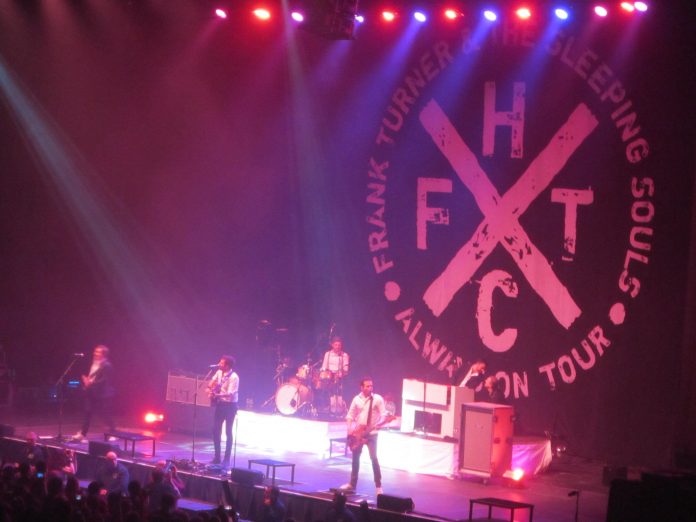 When Frank Turner thanks the support bands in his set (and you get the feeling with Turner that bands on his tours are only here because he loves them) he says: “I’ve been listening to Jimmy Eat World for 20 years, and to play after them is amazing”. And it is, really. A name that everyone knows, but one that very obviously also possesses enough songs to fill a 45 minute support slot, as easy as you like. Whether it’s the opener “Pain”, the even better “Big Casino” or “World Ain’t Never” there is a real class here. Jimmy Eat World, though are an understated affair. This might be an arena, but there’s nothing showbiz about them.  Singer Jim Adkins does a couple of “woo-hoo’s” and gets the crowd to shout back, but you suspect it’s because he feels like he should, rather than wanting to. But that understated nature is a massive plus too. Because stuff like “Hear You Me” really works in its balladic way. Rock stars they might not be, but rock they can do. “Bleed American” is magnificent, “Sweetness” benefits from some proper rock n roll piano with touring member Robin Vining to the fore, before the one everyone remembers and the one Taylor Swift lip-syncs to.  There’s a reason why “The Middle” was a mega hit. And there’s a reason why Jimmy Eat World were going long before it and lasted long after. 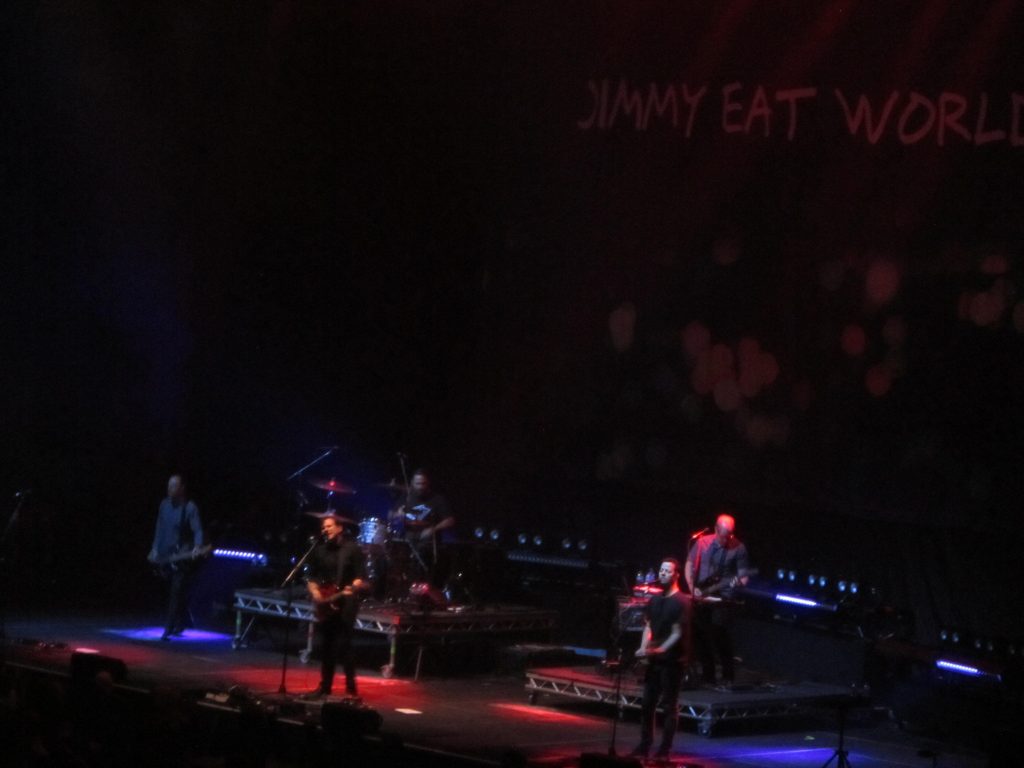 Having seen Frank Turner many times over the years, there’s a moment every show, where you go: “blimey, he’s heavier live than on record isn’t he.”

Tonight’s is the first song. “Out Of Breath”. He’s racing around with his Sleeping Souls and its breakneck punk rock. And he sounds like he means every word.

He always means every word, to be fair, and if ever you wanted a discussion as to why he’s gone from The Bar Academy in Brum 12 years ago to it’s arena tonight then allow me to put forward this suggestion: It’s because he’s treated every one of the 2299 gigs the same.

Turner is a phenomenal songwriter, capable of elucidating my own thoughts on the loss of my mother on “The Queen Is Dead “ which he doesn’t play tonight, to empowering people to believe in themselves, on “Photosynthesis” which he does.

But somehow, here – like always when Turner plays – its not the actual songs, so much as the vibe. It is a joyous thing to watch him in full flow.

Many of these are from “Be More Kind” – the title track is played as an encore – its poppier moments work well too, but the snarling “1933” is the standout here, it really is.

There’s an acoustic bit too, with a dip back to the debut album with “Worth Things Happen At Sea” (“I’ve stopped smoking, I can play these songs again”, he jokes) and “Love Ire And Song” from the second, which is strangely profound again in these times.

“I Knew Prufrock Before He Was Famous” is a crackling moment of energy, but if you want to understand this then “I Still Believe” and “Try This At Home” are basically the key. The thought that anyone could have done this, that we’re all the same, it’s just that he’s the lucky one.

The encores are interesting, because you do wonder how he’ll transform is raucous crowd –surfing club shows to the arenas he’s now in, but come on. This Frank, so he just does it. Splits the crowd into two and surfs his away back through a sea of arms.

Why you ever doubt his abilities is beyond comprehension. Whether there were 20 people there 12 years ago, or 5,000 tonight, or it’s the first show or the 2299th, then to Frank Turner they are all the best one he’ll ever play.