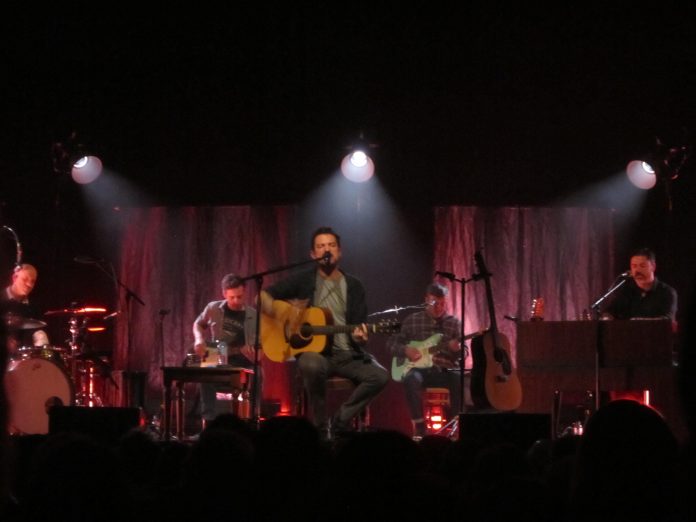 I first saw Frank Turner four years ago, a friend couldn`t make the show and sold me the ticket as I’d heard about him and really fancied seeing what all the fuss was about. The show was long sold out and when the band hit the stage, the three thousand strong audience went crazy and were jumping, dancing and singing every word to every song and I stood there thinking, what the hell. It felt like I’d stumbled into a religious convention and must have been the only one there that night knowing no songs. I`ve seen him a couple more times since and have grown fond of this folk / punk singer songwriter so was quite looking forward to tonight`s sort of acoustic show as it was at the wonderful symphony concert hall and it would be a little different.

There is no fuss as Mr Turner arrives on stage to present a forty-five-minute solo set of tracks from his recently released “No Man`s Land” album. The album is a concept album with songs about women from history, often with connections to music and to be fair has had mixed reviews. The album draws attention to the lives of captivating women, whose amazing lives were overlooked due to their gender. `Jinny Bingham`s Ghost` kicks us off, a song about a 17th century Camden coach house owner accused of being a witch. We stay in London for `The Graveyard Of the Outcast Dead` about a mass burial ground in Southwark for prostitutes and as the singer shared, his version of a Christmas song. The set includes songs written about Jazz patron Baroness Kathleen Annie Pannonica Rothschild, Byzantine abbess, poet and composer Kassiani. American dance hall singer and actress Dora Hand, American singer, songwriter and guitarist Sister Rosetta Tharpe and Egyptian feminist leader Huda Sha’arawi. It was a joy to listen to not only these stripped back tunes but the stories behind their composition and the incredible women whose lives shaped them.

After a short break we enjoy an unplugged set with Frank and his band. the Sleeping Souls, Ben Lloyd, Tarrant Anderson, Matt Nasir and Nigel Powell. It`s gig number 2432 as he reminds us. What I really admire about Frank is that he`s honest enough to share songs he`s written about his life, good times or bad. We get to hear songs about life on the road, unhappy romantic relationships, substance abuse, mental health, suicide, death and his ideology on life.

There`s a dip into his back catalogue with songs such as the passionate `I Knew Prufrock Before He Got Famous` and `Redemption` before his Amy trilogy of songs `Reasons Not To Be An Idiot`, `I Am Disappeared` and `Tell Tale Signs` cathartic songs written about a relationship that haunted his life. The highlight for me was `The Way I Tend To Be` a song that never fails to hit the spot. `The Opening Act Of Spring`, `Love Forty Down` and `Balthazar, Impresario` quickly follow before we get towards the conclusion of tonight`s show. If there is one song that sort of sums up a Frank Turner show it`s `Photosynthesis` with its chorus of “and I won’t sit down, and I won’t shut up, and most of all I will not grow up” which has this over two thousand strong audience on its feet singing and shouting along.  The flame is ignited further with the wonderfully anthemic `Recovery` and uplifting `I Still Believe`     The show finishes on an optimistic note with the subtle `Be More Kind` as the guys take their leave. Well tonight was certainly different but had all that you`d expect of a FT gig. If there`s one thing you can always take away from a Frank Turner event it`s his message of hope and perseverance.