The Fragile Hearts, a local two piece are well named. Songs that are indeed so fragile they may smash in two at any moment, and yet delivered with genuine conviction. The cello and guitar combination works perfectly, and when its topped off with lyrics that veer from heartfelt like the Jackie Leven homage “Leven Lullaby”, to matters of the heart with “The Way You Say My Name” you have something special. Songwriting of the highest calibre is shot through “The Other Side”, which deals sensitively with the plight of migrants trying to cross from Mexico, while the best is saved until the last. “Old George” a particularly poignant narrative on someone who lived in the flat below. “I never knew his second name” goes the key line, and the lack of community in modern life is exemplified, right there. Standing in for Arkansas Dave (“we are ready at a moments notice, unless he doesn’t show in Arkansas, then we’ve a problem”) The Fragile Hearts are a real find. 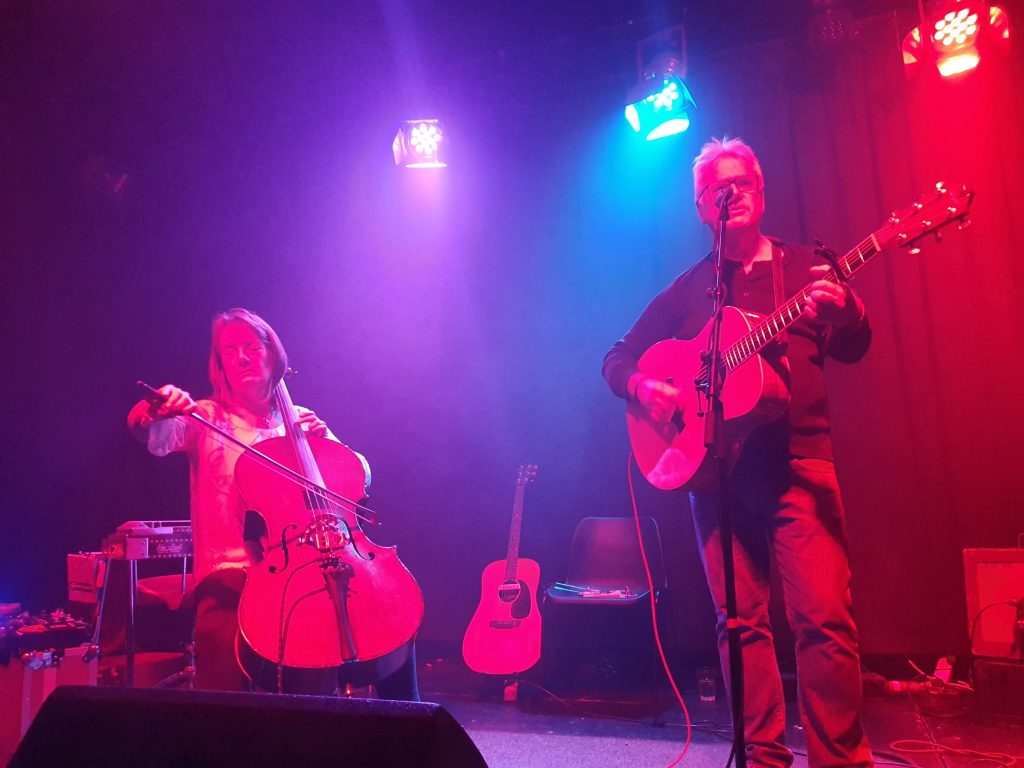 Speaking of problems. Frankie Lee probably shouldn’t have ate that lemon sweet before he plays “Downtown Lights”. A standout moment on his recent “Stillwater” record, it will be so here, but only after he’s sorted the lemon drop “Mama Cass died choking on a sandwich, we’re gonna be alright …..” he jokes.

Mention of that moment shines a light really on the relaxed vibe that Lee and the incredibly talented duo he has with him on Pedal Steel and guitar create. Happy to be here in the “home of UB40, man, here’s one from their second record” and even more thrilled to tell you that he’s binged watched Peaky Blinders (“all three series’ in a day! Don’t tell me attention spans are shortening!”) the main business at hand is songs from the just released album, and somehow, in the live setting, they are even more warm and somehow looser than the studio versions.

“Broken Arrow” kicks things off, but the feel that this is more impromptu than stylised is rather underlined by the fact they are working without a setlist and “Only She Knows” is chucked in after consultation between the trio.

These sort of songs lend themselves to that too. Tales from the heartland in the great tradition, there’s a Springsteen-ish feel about the characters and the dirt under the fingernails of “(I Don’t Wanna Know) John” and a fabulous “East Side Blues”, on which a real longing comes through.

The band – and to be clear this absolutely feels like a band affair – cuts loose on a country fried “High And Dry” and as “Buffalo” (another one from his other record “American Dreamer”) ends things here, you cannot escape the thought that everyone here is just doing what they love.

For proof, take the only cover tonight. Warren Zeavon’s superb “Carmelita” is played despite Lee not knowing all the words, and John, the wonderful Pedal Steel player having to prompt him. Somehow that seems to sum them up. Supremely talented. Wonderful musicians, with wonderful songs, but still just as fallible as the rest of us.

In short, exactly what great singer/songwriters should be.