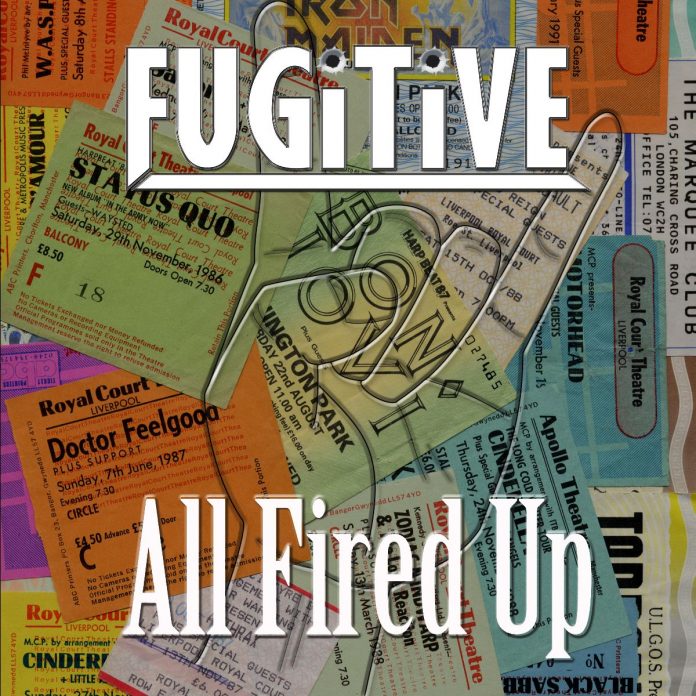 Liverpool hard melodic rock quartet, Fugitive, release brand new music in the shape of ALL FIRED UP, on Friday 07 December 2018.

All Fired Up is the 3rd single to be taken from their forthcoming album, slated for release in April 2019.

Mainman, Michael Angel, said, ““We can all remember our first ever gig. We know when we were bitten by rock! Mine was with Status Quo.

When I walked into the Royal Court Theatre, Liverpool on 29th November 1986, with my big brother Steve and some friends, I knew that playing live in a rock band was what I wanted to do! I knew it within the first few seconds of the show.

We were right up in the gods in the balcony circle, (the single artwork includes the very ticket stub from this show!) watching little flecks of the plaster fall from the ceiling onto the crowd below. We were kids and we had only just scraped the cash together to get in the show at the last minute, so that was all we could get… – but we lived every note as if we were right on stage with the band!

All Fired Up is the story of a first gig experience, of his awakening, that first date when he falls head over heels for ROCK!”

With a collective age of over 200, Fugitive are a melodic hard rock band from Liverpool, UK and proof-positive that you are never too old to rock hard and nor to give up on your dreams. In fact, this year, Fugitive performed at HRH AOR in March, then travelled out to Ibiza in May to rock with the best of them at HRH Ibiza Road Trip.

Michael Angel and Ranko ‘Chip’ Veltro are longtime musical partners and have produced 2 studio albums under the name of FUGITIVE. But in 2017 the band undertook a line-up change, with bassist, David Steele, and drummer Al Catraz joining the pair to form what feels like a whole new band.

Having cut their teeth on the UK biker gig scene, MkII of the band knuckled down to write and record their forthcoming album, due for release early in April 2019.