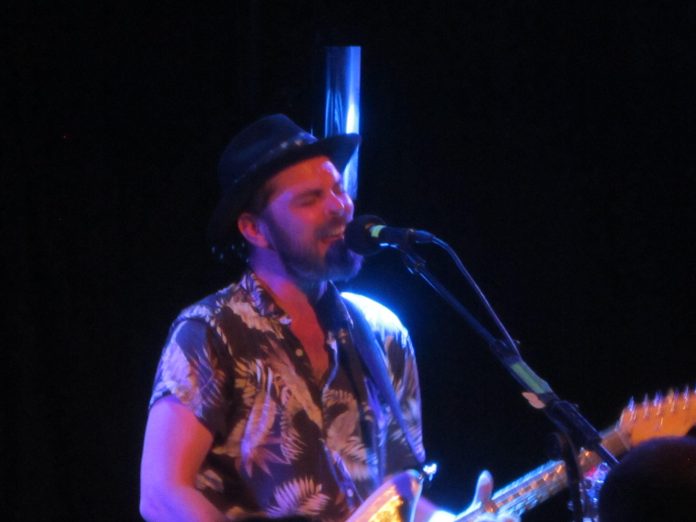 I must confess that I liked Supergrass and saw them a couple of times but they weren`t a band that was really on my radar. My wife loved them so when I heard Gaz Coombes, their former lead singer was playing an intimate venue in Wolverhampton, I thought that`ll be a nice surprise. As well as being the cheeky chappie in the band, Gaz was recognisable for his large sideburns so when he arrives on stage the first thing I notice is that he`s grown a beard. Time flies and it`s strange to think that it`s nearly nine years since the demise of Supergrass but Mr Coombes has been pretty busy and has released three well received solo albums `Here Come The Bombs` on which he played all of the instruments, `Matador` which was nominated for a Mercury prize and last year`s `World`s Strongest Man` Indeed his last band released six albums in their career so he`s well on his way. This evenings event is in a sort of wooden floored dance studio, almost resembling a small basketball court and not surprisingly Sold Out.

The night begins with Matador (De Capo) with Gaz playing an acoustic guitar accompanied by a piano beat from an effects box at the side of the stage. A track from the last album in `Hot Fruit` is shared with more fx and looping of his vocal to create a harmony before taking to the piano to play a new track `Salamander`

The show continues with Mr C switching between piano and guitar to present tracks across his solo career with `Shit (I`ve Done It Again)`, `Oscillate` with more voice looping, `White Noise` and `Seven Walls` which stop started as Gaz heard a weird noise coming from the speakers, although none of the rest of us did. But this guy has been performing for nearly a quarter of a century so maybe there was something. The last single release, the upbeat `Deep Pockets` gets a blast, quickly followed by `Oxygen Mask` before `The Girl Who Fell To Earth` which was a song inspired by his daughter, who is now fifteen. The show closes out with the hypnotic `The Oaks`, `20/20` and epic sounding `Detroit

It doesn`t take too long for the faithful to cheer him back to the stage for what turns out to be a three-song encore. `Walk The Walk` from the last release is given an airing before a couple of Supergrass classics with `Moving`, that has all and sundry singing along before ending with the inimitable `Caught By The Fuzz`

Fair play to Gareth “Gaz” Michael Coombes, this was an enjoyable intimate show in a modest sized venue where it would have been easy for him to rest on his laurels and play Supergrass hits, but this is a more mature artist, with his own material and style to present and there`s a great deal to be admired in that.