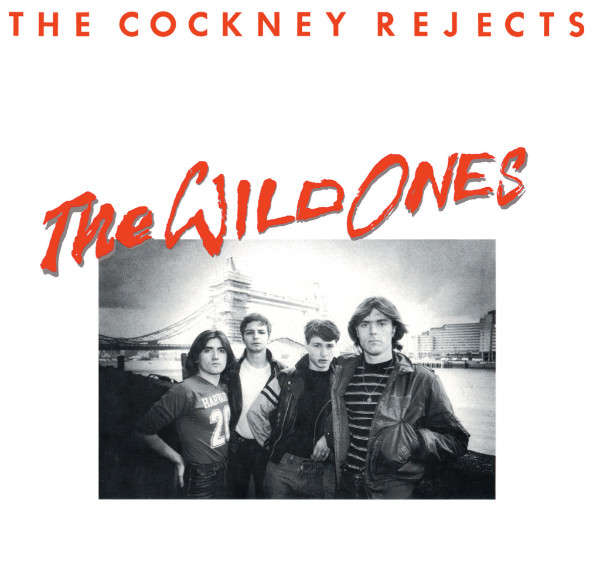 Cockney Rejects reissue their album ‘The Wild Ones’ on 4 June 2018 through Cadiz Music.

Originally released in 1982 – and available here for the first time as a standalone CD – ‘The Wild Ones’ was Cockney Rejects’ first foray into full blown, hard-assed Heavy Rock. Co-produced by UFO’s Pete Way, the 10 tracks herein showcase not only what a fine rock ‘n’ roll outfit the Rejects were but some seriously fine song-writing to boot.

The band also feature on a limited edition fully signed split 7″ green vinyl single with The Outfit [the band featuring Jeff Turner from Cockney Rejects, though brother Mick Geggus also guests on this track]. The Cockney Rejects track ‘Chapecoense’ references the Brazilian football club whose first team was tragically killed in an air accident in 2016, Sung in Portuguese, Jeff’s heartfelt lyrics are a tribute to those who died, and also to the families who were left to cope in the aftermath.  A percentage of the proceeds will be donated to them.  The Outfit is a six-piece band that brings together a range of talents, each also playing in different bands and indeed styles, and hailing from the East End.  The Outfit track is the incendiary ‘Boss Of Bosses’.  The split single is released this month and available from: https://viveleshop.com/products/cockney-rejects-chapecoense-the-outfit-boss-of-bosses-split-7-single-signed

Formed in the turbulence of late Seventies East London as an answer to the art school punk that dominated, Cockney Rejects soon cornered their patch with their timeless brand of terrace singalong classics and white hot live set.  The Rejects were fiercely working class in stance and attitude, the band eschewed the political ramblings of punk’s first wave and sang about their own circumstances – police harassment, street battles and football to name three.  Signed by EMI after playing four local gigs (less than The Pistols!) they found themselves playing sell out tours and seeing their debut album storm the charts.  Top of the Pops appearances followed, which became the stuff of legend as the band generally ran amok in the hallowed White City studios, finally getting banned from the show for their boisterous behaviour.

2013’s film release ‘East End Babylon’ upped this seminal band’s profile and Cockney Rejects have never been busier, touring the world.  ‘The Wild Ones’ – and indeed ‘Chapecoense’ –  shows just how powerful a band Cockney Rejects are.