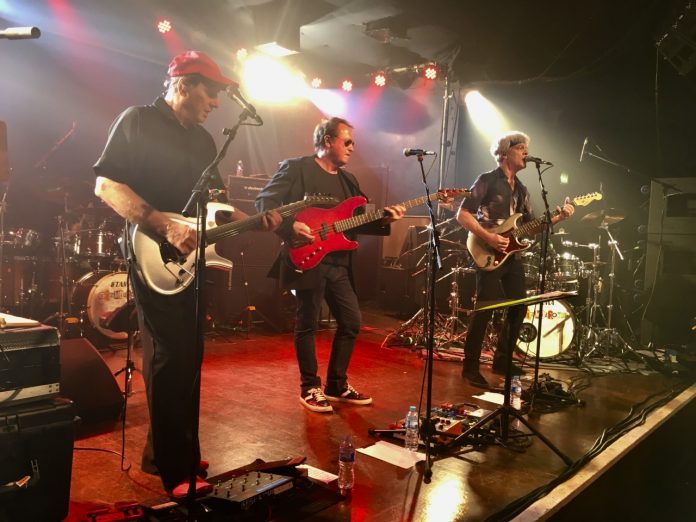 Traffic problems be damned. You aren’t stopping Garry from seeing the prog supergroup

There are gigs that you just have to be at, and even though the Highways Agency did their very best to ruin a perfect day, their obsession with hampering motorists on the M1 & M6 overnight couldn’t put a dampener on the performance by Gizmodrome I had witnessed earlier in the evening.

Gizmodrome are a proper nailed on Supergroup…..Stewart Copeland from The Police, Mark King from Level 42 and Adrian Belew from King Crimson & Talking Heads were joined by relatively unknown outside of Italy, Keyboard wizard Vittorio Cosma……what a band!!!!

The Gizmodrome debut album was released in late 2017 to a mixed reaction…..not sure everyone quite got what the band were trying to do, but not me…I loved it from first listen, it’s an amazing collection of music and we were treated to every single track from the album tonight.

The chance to see some of the worlds greatest musicians up close and personal (I was hugging the barrier four feet from Adrian Belew) was too good to miss, and my word these guys did not disappoint, the set list was a perfect mix of Gizmodrome tracks, some lesser known Police tracks (Miss Gradenko  was insanely good), a Clark Kent number and a couple of King Crimson tunes, it was just magnificent!!!!

The whole thing about Gizmodrome is that the music that the band have produced is not only top notch but it’s fun too, some of the lyrics are on the quirky side and puts a smile on the face of the band and punters alike, the atmosphere in this small but fabulous venue was as good as any I’ve encountered for quite some time.

Tracks from the Gizmodrome album such as ‘I Know Too Much’, ‘Man On The Mountain’, ‘Spin This’…….in fact every track from the debut album sound even better when performed live, fingers crossed that one of the five live shows the band are performing worldwide will be recorded for CD & Blu Ray/DVD release…..personally I would love to relive this show time and time again.

When I interviewed Stewart Copeland recently for one of my radio shows he mentioned that this Gizmodrome project was not a one off and that when schedules allow the band will return to the studio to make another album, and let’s hope it’s not too long before the band return to the stage on these shores, these guys are well worth making the journey to wherever they are playing…..let’s just hope the Highways Agency play fair and engage their brains next time.