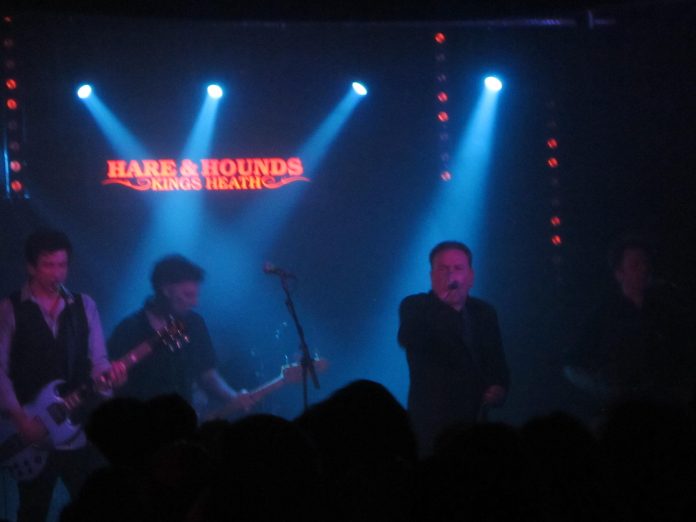 I must own up and confess that The Godfathers were one of my favourite bands in the eighties. I was fortunate enough to see them many times and loved the unbridled intensity they brought to a show. At times there was almost a charge in the atmosphere, Their second album `Birth, School, Work, Death` to me is up there with my ultimate all-time album Dexy`s Midnight Runners `Searching For The Young Soul Rebels`.   Tell me how many people still play or sing songs from an album released nearly thirty years ago?                 ,

So I was really wired to get an opportunity to revisit my Golden years and spend some time in the company and reacquaint myself with some, almost lost friends. The band has changed, or developed over the years so forgive me indulging in a little retrospective. The Godfathers were formed by Peter and Chris Coyne after the demise of The Sid Presley Experience in 1985.Fellow Sid Presley member, and later Godfather, Del Bartle went on to form The Unholy Trinity with drummer Kevin Murphy, The band ceased activity in 2000.

In 2008, the band reformed with its original line-up. In March 2009, the band announced a change with Del Bartle returning to replace Kris Dollimore. Grant Nicholas later replaced George Mazur on drums, and Mike Gibson also left the band. In 2016 Chris Coyne left the band and was replaced by Darren Birch, formerly of Gunfire Dance and touring bassist for both Walter Lure and Brian James. The new line-up recorded a new album, “A Big Bad Beautiful Noise” in Birmingham that summer, which was released in February 2017, preceded by a single, “You Don’t Love Me”. The album was a cracker and harked back to the classics they issued in the eighties. The fellas have played my hometown about twelve months ago but I was gutted not to be able to attend so tonight was a shit or bust challenge for me.

The warm up is a localish band Fukdust4 a Punk`n`roll outfit, from Birmingham, Coventry, Tamworth and err Oswaldtwistle, Lancashire comprising Dave Ohms on guitars/backing vocals, Bri Slutcher on guitars/Lead vocals, Jeff Hateley on bass/backing vocals and Steve Gameson on drums/backing vocals. They are Ex members of Drongo’s for Europe/ Sister Automatic/ Uk Subs/ The Jellys and a current member of Wolfsbane, Their forty-minute set was a mixture of In your face old school punk with a fair slice of good old rock n roll, just what was required for a Friday night. Songs included “Rock n Roll Girlfriend”, “D.U.M.B.”, “Ventolin”, “It Meant Nothing To Me”, “Suicide Station”, “Two Timing Son of a Bitch” and “Monkey At Sea” There were nods to the Ramones, Pistols, The Wildhearts  and The Clash but this was just good time rock n roll with a dash of punk/ new wave. The Fellas have an album out called “The Last of The Rock n Roll Bastards” so I`ll be checking that 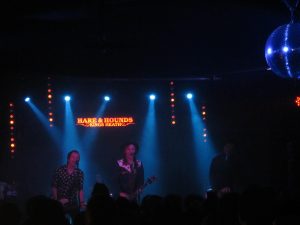 So on to the main event and you know you’re in for a good night when the band are standing at the back of the venue, all suited and booted and ready to pass through the expectant audience as the theme tune for the TV series “The Persuaders” blasts out. The wonderfully political anthem “This is War” kicks us off before one of my two favourite GF songs “Cause I Said So” is almost spat out and I’m transported back to my twenties and the joy this tune gave me. Peter`s subtle humour is evident as he quips `Cum On Feel The Noise` lifted from those Black Country heroes Slade and the boys blast in to “A Big Bad Beautiful Noise” the terrific title track of last years release. The pace is relentless as “If I Only Had Time”, “Till My Heart Stops Beating”, “I Want You and “Obsession” are blasted before the band come up for air. Somebody in the crowd, who either has no sense or has never attend a GF show before, says something smart to our leader and gets short shrift from Coyne. I really had to contain my laughter, nothing has changed in thirty years. While we have a slight break, he reckons that once again tonight smelling weed and kebabs he is reminded that we are in England`s second city. I really dunno what our city visitors’ bureau would say about that but I’ll take it. The garage rock classic “Walking Talking Johnny Cash Blues” is shared before the Stonesish “How Low Is Low”, the in your face “Some Reaction”, superbly lyrical “Unreal World” and as Mr Coyne put it, the shocking “Defibrillator.”

A song that Johnny, Dee Dee, Joey and Tommy would be proud of “I Can`t Sleep Tonight” starts with Coyne shouting “Eins, Zwei, Drei, Vier” and ends with a thank you to the boys.The delightfully psychedelic “When Am I Coming Down” cranks out before the thumping “I`m Unsatisfied” and a song that Peter wrote from the perspective of a woman “Love Is Dead.” The set is closed out with what I thought sounded quite sixties live “She Gives Me Love”, the trippy “This Damn Nation” and my all time favourite track “Birth, School, Work, Death” A perfect song and a statement i`d consider having etched on my gravestone. Genius.

Wow, what a gig! There was no let up from these boys. At was at times unnerving, relentless and brutal in an encouraging way. This was a night for me to renew old acquaintances and to remember people lost along the way. A great night of head down no nonsense intelligent boogie, where Coyne doesn`t suffer fools gladly and hasn`t lost his spark that made the band a must-see draw.

A brief respite came as the stage was cleared of spilled water and the troupe return for a deserved encore with the tremendous “I Want Everything” off the first album, “Let`s Get Higher” and to finish a cover of the Ramones “Blitzkrieg Bop” Well I don`t know about the band but I was drained after this intense performance. The newish band, now comprising Steve Crittall (guitar) Alex McBain (guitar) Tim James (drums) and Darren Birch (bass), along with their frontman were every bit as good as the classic line up from years ago.

For the uninitiated. all I’d say is…. please let the Godfathers make you an offer you can’t refuse with their Big Bad Beautiful Noise.