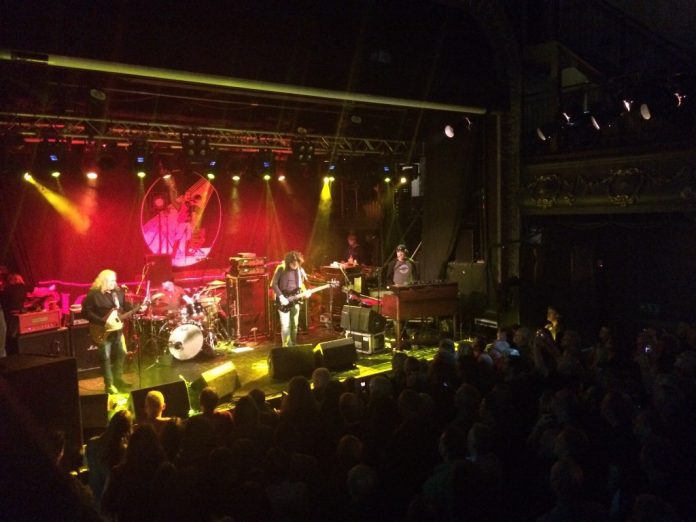 Rock’s one offs hit the dales

No two Gov’t Mule shows are the same they proudly boast, and as if to prove it, they return for the second encore with Warren Hayes uttering the words: “we didn’t know what we were gonna do right until we got up here. We’ve got one more for you, hope you enjoy it….” With that the unmistakable strains of Free’s “Wishing Well” end things.

It’s also the “we” here that is important, because if there’s no such thing as the same setlist, you can pretty much bank on the All-star-jam in the encore. Augmenting the four piece here is the guitar legend that is Bernie Marsden. He’s already presided over run through’s of “Need Your Love So Bad”, “Ain’t No Love In The Heart Of The City” and “The Thrill Is Gone” (played here to commemorate the passing of BB King, who died a year before) before the Free cover, and had provided a real excitement to the end of a gig that barely needed any.

It had started way over two hours before, with slab after quite marvellous slab of bluesy rock n roll. Kicking off with “Mr Man” and a faultless “Mr High And Mighty” as Hayes’ guitar intertwines wonderfully with Danny Louis’ organ as these faultless musicians, ones with a line back to the great jam bands of the Grateful Dead et al, let themselves go.

There are some real gems here, “Which Way Do We Run?” is a real highlight, but is far from the only one, as “Unring The Bell” runs it a close second, and if the cover of Blind Faith’s “In The Presence Of The Lord” would usually signal a break, the curfew here means the guys have to carry on all the way.

When they do, the more extended meanderings of what we might call the “second half” means that although there is no letting up in the dazzling skill, there is perhaps a touch of momentum lost. That said there’s an absolutely stonewall brilliant version of “Drivin’ Rain” which is tinged with a real hard rock feel to act as a kick to the guts.

The main set ends with a reggae tinged version of “I’m A Ram” – but the boys can’t resist one last subversion, and you’ve never heard “Love Me Do” like this until this particular Fab Four get their hands on it.

And, as the encore amply proves across its 30 glorious minutes, there’s nothing that Gov’t Mule won’t try their hands at. If every show is unique, then so is the band.