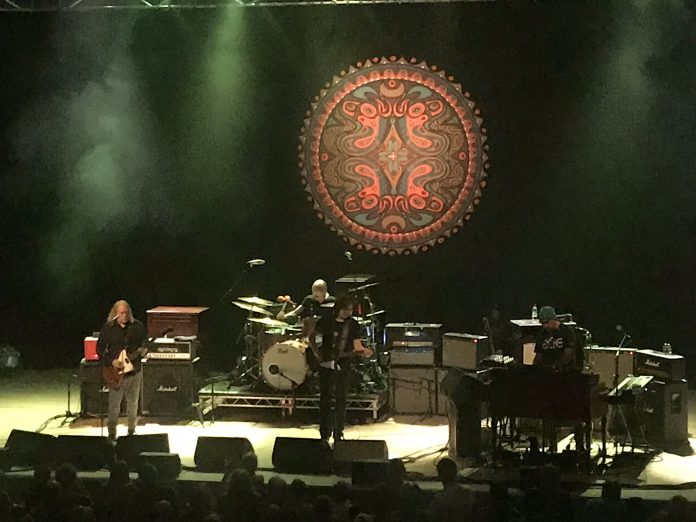 Right at the end of this is all the proof you need as to why the faithful love Gov’t Mule, and also why – and let’s be honest about this – if you aren’t “in it for the long haul” with the band, as a friend of mine put it to me this morning, it can be an odd thing to watch them.

When they went off for the encore, a roadie appeared onstage with a sheet of paper with lyrics on. What they were is Sabbath’s “Hand Of Doom”, a vicious and extremely bleak discussion on drug addiction.

It is brilliantly played, and all kinds of credit is due to arguably the world’s biggest jam band for coming to Birmingham – the home of metal, for goodness sake – and finding a Sabbath song that you would never have expected.

The problem is that is a double-edged sword and permeated the rest of the set too. On one hand GM don’t do compromise, they are not even remotely arsed with “crowd-pleasing” or anything of the sort. I guess, to paraphrase Motorhead, they know what they’re doing and they do it real well.

But, on the flipside of that – and I am just being truthful here – somewhere around the second drum solo, the crowd around me starts to thin and by the end of Robert Johnson’s ferociously violent “32/20 Blues” which ends the second set, there is a stampede for the exits, meaning not many heard the Sabbath song at all.

I offer this as no comment on either the crowd, who are entitled to vote with their feet, and certainly no comment on the band, who are fully able to do exactly what they please, but its that kind of show. One where the fanatical few have the time of their lives.

Govt Mule are clearly stunning musicians. “Temporary Saint” is superbly done, “Banks Of The Deep End” likewise, and Warren Hayes’ playing on “Red House” would have made even Hendrix jealous.

Interestingly, though, the first set ender “Stone Cold Rage” is the only time where the show becomes viscerally exciting, as it were – a genuinely excellent hard rock song, it is an example of the thought that Govt Mule can be whatever they please.

Even from night to night you imagine what what they want to be changes.

The second half kicks off with a version of Allman Brothers “Kind Of Bird” and organ player Danny Louis excels, here and each member of the band gets their own chance to shine at some point, Matt Abs and Jorgen Carlsson get their moments for example in “Tributary Jam”.

There are a couple of moments in the second set too, where this becomes less about dazzling wizardry and more about the sheer enjoyment of the song, “Mr High And Mighty” in particular and “Down On The Brazos” mixes both things superbly.

When the dust settles, though, Gov’t Mule aren’t going to change for anyone. They are single-minded and they are incredible at what they do. As an exercise in preaching to the converted this will do just fine. That is a blessing and a curse, of course, but no one in the band or in the faithful congregation is remotely bothered.