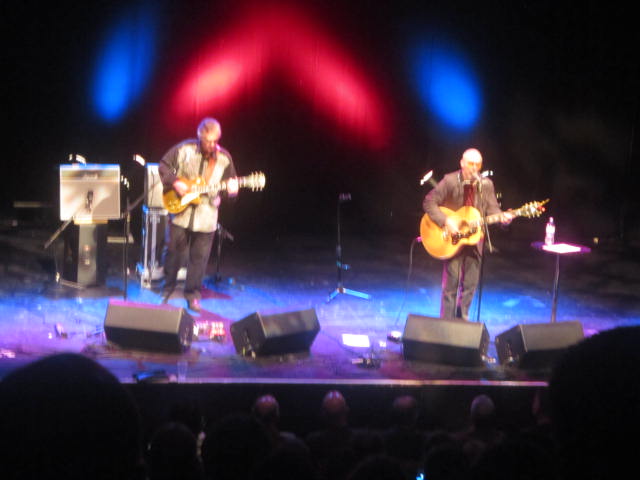 Graham and Brinsley strip down and Damian reports

I must admit I have always liked Graham Parker and have been lucky to see him a fair few times over his long career. He took off to the States in the early eighties and we were really starved of his presence, especially in the Midlands, for many, many years. This last eighteen months or so he has rectified this with shows in Birmingham and Leamington with the Rumour and a show with long time stalwart Brinsley Schwarz in Worcester. Tonight was another stripped down affair with his long time cohort.

A little after 9 and the two troopers almost sneak on stage to the applause of this near enough sold out show.

A brief acknowledgement and straight into two early classics “Watch the Moon come down” from the 1977 Stick to me album and “Silly Thing” from debut album Howlin` Wind. My favourite recent track “Stop Cryin` about the Rain” from the Three Chords Good album follows, a album that re-united Mr Parker with the Rumour for the first time in 30 years on record.

We then get a mix of some old and more obscure tracks from the artists career in the guise of “Fools Gold”, “Disneys America” written about a proposed Disney themed opportunity that didn`t come to fruition in Virginia, “Socks n Sandals”, “You’ve got to be kidding” and “Stick to me”

There ain`t too many songs that incorporate a kazoo solo but we get one tonight with the catchy “Pub Crawl” from the latest release, last years Mystery Glue. “Under the Mask of Happiness” from the underrated eighties Mona Lisa`s Sister is shared before a track from my personal favourite album Squeezing out Sparks in the form of “Discovering Japan”.

Brinsley has an album to offer called Unexpected there’s a chance to enjoy a track off this recent offering with “You miss again”.

Interspersed with these tunes is the line of the night which Mr Parker shares when describing one of the songs as rocking like a safari park chimp. Quite.

The encore has Parker return solo for a wonderfully emotive version of “You Can`t be too strong” before Brinsley joins him to run through “My Life in Movieland” and a cover of the Tramps classic “Hold Back the Night” .This was a superb show and we can only hope that he doesn`t return to being a stranger to these shores.