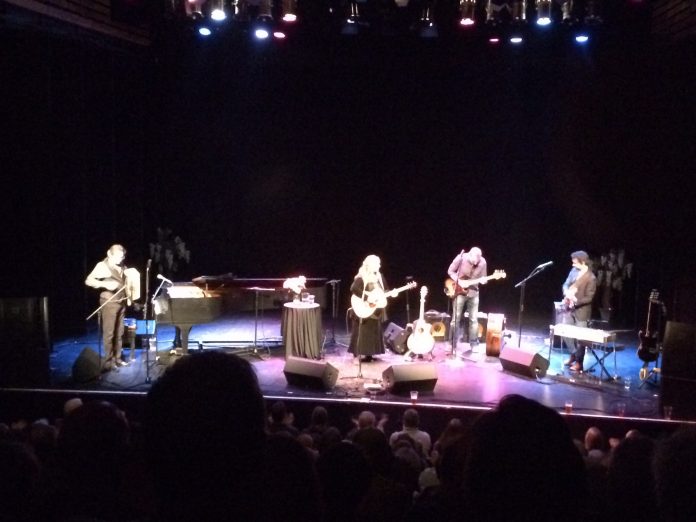 “It’s a fact that once you’ve written a song covering incest and murder, there’s nowhere you can’t go after that…..” So says Gretchen Peters midway through the first of her two sets tonight. Perhaps an explanation is in order. The song in question, “Blackbirds” has just won song of the year at the inaugural UK Americana awards, and it was – as she’d said just before the rather more striking line – the first song she’d made with co-writer Ben Glover.

The track itself is a understated Americana affair with vivid imagery, a real gift for storytelling and a thoroughly dark heart beating within it. As such then, it’s perfect as a summary of Gretchen Peters.

Since she stepped over the divide from writer to performer, Peters has made something of an artform of writing acerbic stories and setting them to music. She’s also been a frequent visitor to the UK. This tour in support of her just released – and brilliant – career retrospective “Essential”, is she reckons, is at least her thirtieth since first playing here twenty years ago.

In her engaging, quiet, self-effacing way Peters claims this has been driven out of necessity: “The only place my first record wasn’t met with total indifference was here”, she jokes at one point, but whatever it is, the constant touring has paid off and this show, as are most on the tour, is sold out.

The attentive audience is treated to something approaching a masterclass in this type of thing. Stretching at close to two hours, the career spanning setlist is one of frequent thrills. The breadth of her material hits home too. “Guadeloupe” is desolate, “Hello Cruel World” is bluesy and “Woman On The Wheel” has a touch of Steve Earle about it.

Its not just about the established favourites either. The artist herself asked for ideas for the set before the tour started, and professes surprise at the amount of requests for “Love And Texaco”, which has a cracked, world weary quality.

Split into two halves – the first section had concluded with a brilliant “Everything Falls Away” as the three members of Peters’ band, including her husband Barry Walsh bounce off each other – the second begins with Peters solo playing a stark “Independence Day” at the piano.

During the second half a gorgeous “When You Are Old” is dedicated to Terry Wogan (who had selected the song in his Desert Island Discs) but it’s the ability to write about characters that really stands out. “Sunday Morning (Up And Down My Street)” is a tale of everyday life, while the level of dissatisfaction that the heroine of “Five Minutes” possesses makes that a thing of bleak beauty.

Her breakthrough song “On A Bus To St. Cloud” and “Idlewild” ostensibly end the set, but there’s a well merited encore. The pick of the pair they end with sees the Waylon Jennings (amongst many others) “Ain’t Livin’ Long Like This” act as a raucous conclusion.

An artist that really defies conventional description, Gretchen Peters’ brand of not quite quite country, not quite singer-songwriter and not quite blues, is exactly why the Americana movement was needed. And she remains on this evidence, one of its very best performers.