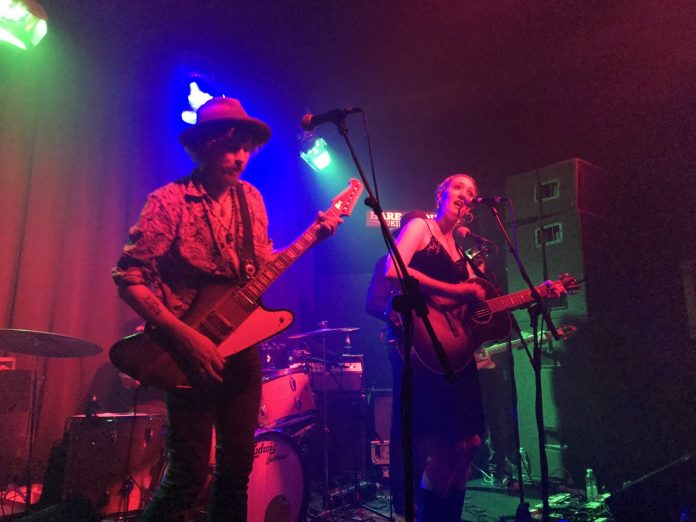 Hannah and the boys get sweaty this time around

“We’re Jetbone, from Sweden and we’re gonna play you some boogaloo” offers Alin Riabouchkin, guitarist and one of the singers in the five piece. MV knows what you’re thinking. “Boogaloo” hasn’t been used as a word since about 1973, but in fairness the boys in Jetbone don’t think there’s been a decent record since then either – and that’s just fine with us. Southern rock n roll should be this much fun, even when it’s from the north of Sweden. “No Way Out” has a soul twist, “It’s So Hard” with the piano of Rasmus Fors front and centre has a feel of Elton John when he was saying goodbye to the yellow brick road, and their cover of “Whiskey Rock N Roller” is entirely right. They are quite superb here, “Woman” has a screeching solo as Sebastian Engberg shows his talent, and “Everybody Needs Somebody To Love” is a rabble rousing stomper. No mean feat on a Sunday night, mind you any night of the week, you’d wager that these boys could find trouble at the drop of their (very dapper) hats. Jetbone then: the most rock n roll boner you will find anywhere. Probably.

Back in the summer Hannah Aldridge had been (literally) across the road from where she is tonight, and delivered one of the finest acoustic sets you’ll see anywhere. Her new album, “Gold Rush”, though was a rock n roll collection, and she’d promised she’d come back and play it the way it was intended.

That night has arrived. In that context, then a line in the first verse of “Aftermath” – the first song she plays here takes on extra significance.

Jetbone are back on stage as Aldridge’s backing band and they collectively do an astonishing job on the Springsteen “Born To Run” era sound of “Love Shouldn’t Hurt So Much” and if “Dark Hearted Woman” is a change of pace it is one that broods malevolently in these surroundings.

Aldridge is a wonderful songwriter with two magnificent records. “Lie Like You Love Me” is a mix of lust, loneliness and desperation. She moves from desperation to self-destruction on “I Know To Much About You” before playing the next three songs acoustically and solo.

“Parchman” crackles with highly charged emotion and “Gold Rush” you sense is deeply personal. In between though, is “Whippin’ Post” from the Allman Brothers (Aldridge was born and raised in Muscle Shoals in the deep south) which she sings and plays entirely acoustically and with passion. It is to her immense credit that she can do this in what is a sweaty rock n roll show. Only the best can switch gear like this and she is right up there.

Jetbone are back for a race to the end that includes a brilliant “Burning Down Birmingham”, possibly the only song about demon possession that isn’t written by a death metal band, in the form of “Lace” – and honestly when she roars “kiss me like you own me” it does come from some other place – and “No Heart Left Behind” which seems like it is going to turn into “Brown Sugar” at any moment.

“Howling Bones” sounds bluesy and primal at the best of times, and most certainly does here, while the sense of enjoyment and camaraderie on stage comes bursting through as “Feeling Alright” which is rock n soul rather than roll, ends things here.