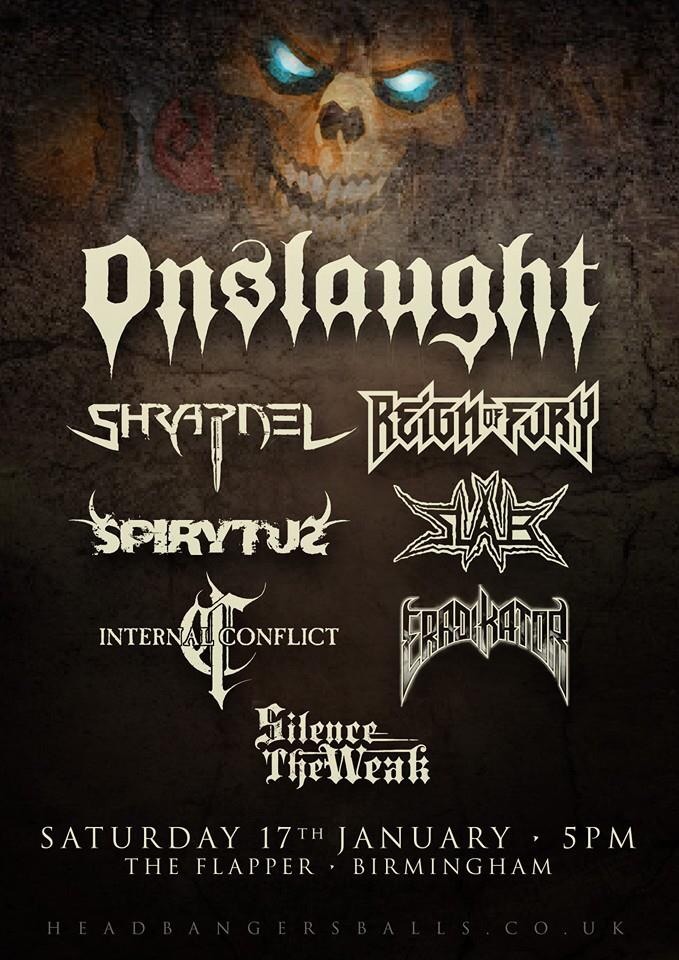 The last ever Headbangers Balls Charity Gig (perhaps…..) and it’s quite a show

It’s great to see that Headbangers Balls is going out in style. After a string of awesome concerts over the last few years and record breaking social media usage this is the very last one. With thousands of pounds raised for cancer charities along the way and who knows how much inspiration to others too.

Appropriately, as metal has shown during the course of these things that it doesn’t need to the mainstream to help, the downstairs of The Flapper is sold-out as everyone comes together just one last time for what promises to be a fine occasion.

With due apologies to the first two acts, MVM gets here in time to see Slab. The Brummie prog metallers are as heavy as they are excellent and as always put on a fantastic show of tight groove and technically incredibly proficient stuff.

Leicester’s Internal Conflict are here on a mission: “this is for your entertainment” screams singer Adam Kyle during the first song and by the second – the handily titled “Baying For Blood” – the five piece are positively slaying with their fine brand of metallic hardcore. “Lessons” is about learning from mistakes and is an extremely angry piece of music. One of their number wears a Haunted tshirt, another a Machine Head one, with Kyle sporting a Slayer tattoo. Internal Conflict’s sound neatly straddles all three, and with songs as good as current single “Another Day” they sit well in that company, Internal Conflict are quite superb.

Not that MVM wants to be accused of being easily bribed, but we did accept a biscuit from Spirytus singer Ryan Walton when arriving at the venue. The jammy dodger was tasty, but crikey, his band would get a good review whatever. The use of a DJ adds a certain crunch to their heavy mix and this metal/groove/funk crossover is something very special indeed. Latest single “All Because Of Me” positively drips with catchy attitude, while “Mandem” is just a great song and it’s giant chorus sees the venue bounce. Closing number “Crucify” well, it just nails it. As do the band.

More than any other band Reign Of Fury deserve to be here. Headbangers Balls was started after singer Bison Steed got the all-clear from testicular cancer a few years back and wanted to do his bit. The first time Maximum Volume saw them, it was in the New Blood Tent at Bloodstock when, so good were they, that we chose to forgo Evile to watch the whole of RoF’s full set. They are just as good tonight. The wonderful thing about the band is the way they are able to so effortlessly move through styles, so that one minute they are a twin guitar Maiden-style attack, while the next something altogether more guttural. That they often do this in the same song is entirely to their credit. A new album – due to drop next month – gives them a chance to air some new tracks and these appear to be stellar affairs. “Born To Die” sees the band break the “no audience members onstage” rule and is a riotous affair. “Psycho Intentions” crushes in a most pleasing thrash way and “World Detonation” (which sees the singer in the crowd) is nothing more than classic heavy metal. Reign Of Fury are a brilliant band and if the reports we are hearing about the new record are true then they could be set for quite a 2015.

Norwich thrash attack Shrapnel are here to bludgeon and once they’ve finished bludgeoning they do it again. The five piece are head-down-foot-on-the-monitor old skool t.h.r.a.s.h. Everyone seems to agree that worldwide this once fertile genre is going through something of a fallow period, so it’s great to see a band actually playing this stuff like their lives depend on it. Even if singer Jae Hadley has had his locks shorn off (“some twat cut it” is his response to Beholder’s Simon Hall heckling him over it) there is no disguising that these guys believe in metal to their very core. Tonight, even with a stand-in bass player there is no holding them black. “Red Terror” is a million miles an hour fists in the air fun and, if “Eternal War” wins the award for the most thrash metal song title of the evening then it more than backs up it’s name. They finish tonight with “Warhead” and their set was quite the explosion throughout.

All of which leaves it Onslaught to finish things off. And did anyone think the Brit metal legends were going to let anyone down? Last summer they played up the road in the Academy so this is a treat for two reasons. Firstly it affords the chance to see Onslaught again and second to do so in a venue that is – shall we say – a touch more intimate than normal.

Make no mistake, though, this is a full-on Onslaught show, so after a lengthy intro the Bristolians are soon “Killing Peace” and thumping their way through “Children Of The Sand.”

A band that was first around 30 years, Onslaught can dip into a hugely entertaining back catalogue. Songs like “Fight With The Beast,” which hurtles along, have a timeless quality. And, if thrash really is on the wain, then no one told these guys.

This is unrelenting stuff. “Metal Forces” seems ready to summon an army to destroy everything in it’s path although perhaps the best thing about the band is that their new stuff sounds just as good as their old and “66Fucking6” from their most recent record garners perhaps the biggest moshpit of the evening. They are, like their song says, “The Sound Of Violence.”

They end with an encore of songs from their debut record – celebrating it’s thirtieth anniversary this year – and all sounds very right in the world of Onslaught.

It is a fitting conclusion to this most wonderful of events. Surely we haven’t actually seen the absolute last of it, have we? If we have, then what a way to go!