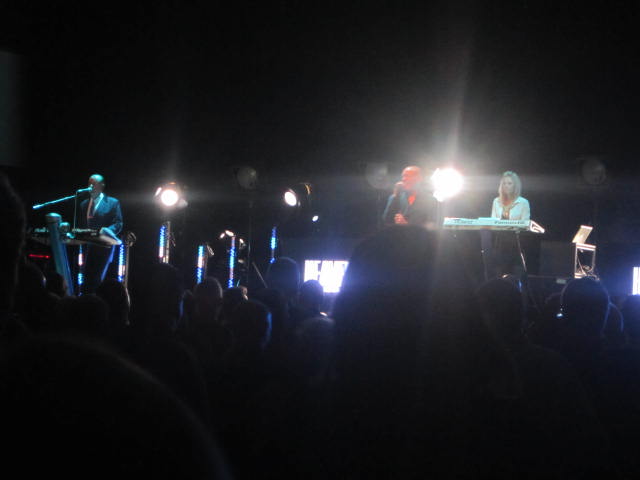 It’s fair to say Damian will be the only MVM staffer with Heaven 17 on his bucket list, but he ticked them off here and tells you all about it

Billed as the Penthouse and Pavement 35th Anniversary tour, the show tonight was split into two parts.
The first section was the Penthouse and Pavement album in its entirety and after the interval, a set of songs by the collective under the heading of The British Electric Foundation.
New Wave and Synth pop band Heaven 17 were formed in 1980 when Glen Gregory got together with Martyn Ware and Ian Craig Marsh who had just left The Human League after a difference in musical direction. Ian Craig Marsh left the band in 2007 as he no longer had the desire to tour.
These days Heaven 17 is generally Glen Gregory, Martyn Ware with Berenice Scott on keyboards and two additional singers in the guise of Kelly Barnes and Rachel Mosleh.
The lights dim and we get an aural snippet from the film A Clockwork Orange, which is where the band took their name, in homage to a band listed in a store in the film.
The show gets underway with (“We Don’t Need This) Fascist Groove Thang” with the audience on their feet singing and dancing away. “Penthouse and Pavement”, “Play To Win” and the rarely performed “Soul Warfare” quickly follows. There is a superb rapport between Glen and Martin, with Glen inferring that Martin misses his former band mate Phil Oakey from The Human League.
The final five songs “Geisha Gils and Temple Boys”, the wonderfully ironic “Let’s All Make a Bomb”, “The Height of the Fighting”, “Song With No Name” and “We’re Going To Live For A Very Long Time” are shared with a few stories and a Happy Birthday wished for Laura’s 50th birthday.
We get a bonus song of the Righteous brother’s classic “You’ve Lost That Lovin` Feelin`”” and the stage empties.
After the break Martyn and the girls returns to head up the British Electric Foundation part of the show. The structure of BEF is usually the Heaven 17 personnel with a variety of guest vocalists sharing classic songs and some a little more usual.
Peter Hooton from the Farm joins the group to share his 1991 hit “All Together Now” and then dedicate the Clash’s “Bankrobber” to Philip Green, the disgraced Chairman of BHS. Next up is Mari Wilson, the Soul Queen of Neasden who performs her 1982 hit “Just What I Always Wanted” and Fontella Bass’s classic “Rescue Me”.
The final guest is ex Sex Pistol bass player Glen Matlock who storms through the 1977 Pistols release “Pretty Vacant” and Pharell William’s “Happy”, a great bass player and songwriter he is, a singer he is not. We get the return of Glen Gregory and he performs a wonderful version of Glen Campbell’s seminal “Wichita Linesman.”
The relaxed feel of the night returns with Glen picking up an acoustic guitar a giving us a rendition of The Human League’s “Don’t You Want Me” which sends the audience wild. Glen recently toured with a tribute to David Bowie with the band Holy Holy, so he presents us with a cracking version of “Ashes to Ashes.” “Temptation” the song that most of the faithful wanted to hear concludes the evening and the place is ecstatic. We get a moving introduction to the final song. Colin Vearncombe was due to perform on this tour but he tragically passed away in January after a motor accident. As a tribute the guests and the band join together to play the superb “Wonderful Life.”
This was an unashamed entertaining nostalgic evening in the company of some really talented musicians; I can now at least tick Heaven 17 off my bucket list.