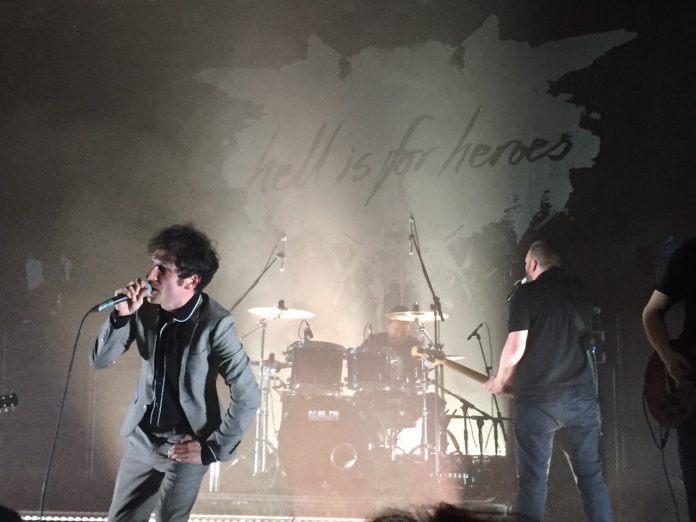 Vex Red were first on the stage and, as lead singer Terry Abbott proclaimed, “it feels like 2002 and the gigs that we wanted to do back then.” It was the kind of gig a near sold-out venue wanted too, and the opening act didn’t disappoint.

Their 40-minute set wasn’t without its setbacks though as Abbott struggled with sound issues throughout. “We apologise if this sounds absolutely fucking awful,” Abbott sheepishly told the crowd. “We feel like a bunch of idiots, sorry.” 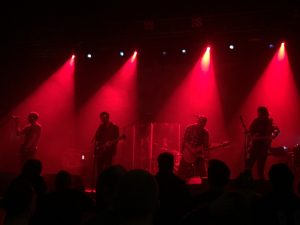 Thankfully, it didn’t sound fucking awful, and as the Institute grew busier, so did the sound, with newly drafted in drummer Dave Neale (formerly of Rooster and Death in Vegas) proving more than his worth with the sticks. The five-piece ended on the anthemic ‘Can’t Smile’ having gone on a whistle stop tour of their sole album, ‘Start With a Strong and Persistent Desire’.

Clearly intent on having a fun time, ‘A’ frontman Jason Perry bounded onto the stage in his navy and red cagoule, introducing his Suffolk band as from California- it was the embryo for an enjoyable set from the pop-punk quintet who were buoyed by the youthful enthusiasm of new recruit Billy and his glowing golden locks on bass.

With a set heavy-laden with songs from their third album ‘Hi-Fi Serious’, Perry joked that “the irony is we’re all too old to get a job in Starbucks now” following their song about the coffee chain. But the crowd, many of whom had dusted off their ‘A’ shirts for the evening, were enjoying the trip down memory lane with a band that were formed back in 1993.

With tongue firmly still in cheek, the infectious Perry said “we’re all here for the music, not for me” after a set that included him doing the robot before launching into former top-10 hit ‘Nothing’ to close a popular set. 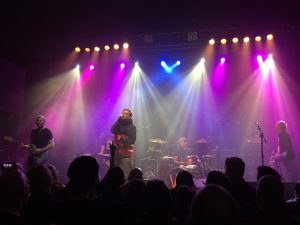 It was the perfect way to set things up for headliners Hell Is For Heroes who were celebrating the 15th anniversary of debut album ‘The Neon Handshake’ with this special tour.

Coming on to Enrique Iglesias’ ‘Hero’, you sensed something special was to happen and they rattled straight into an album that was once voted the 58th best British rock album of all time by ‘Kerrang!’ readers.

Many of those voters were belting back the words of ‘Five Kids Go’ at frontman Justin Schlosberg and whilst the acne of 15 years ago may have been replaced by grey hairs, there was no change in the enthusiasm from the crowd towards a band who sadly never quite realised the potential their early days promised.

HIFH’s finest gig to date in this town was in the old Carling Academy 2 on Dale End and, just like that famous night, Schlosberg was bouncing off the walls- “we waited a long time to play this gig for you,” he told his adoring army.

And there was no time wasted as the hits kept coming- ‘Few Against Many’, ‘I Can Climb Mountains’ and ‘You Drove Me To It’ particular pleasers to the crowd. But it was the more emotional ‘Slow Song’ that truly engaged the audience- clapping in unison in anticipation of a crashing finale which didn’t disappoint.

The encore seemed a bit needless after what had preceded it, but there was still time for an outing of the band’s cover of The Cure’s ‘Boy’s Don’t Cry’, which appeared as a B-side on the ‘Retreat’ single, before they bowed off to the sound of ‘Folded Paper Fingers’- arguably the band’s finest hidden treat of an impressive collection.

A wonderful set left the feeling of ‘what if’ for 2003’s Heroes. Former touring pals of Biffy Clyro, the Londoners stood still whilst the Scots powered their way through the rock scene.

However, sometimes the memories are best when undiluted and this gig reignited many precious moments for those fortunate enough to witness it.