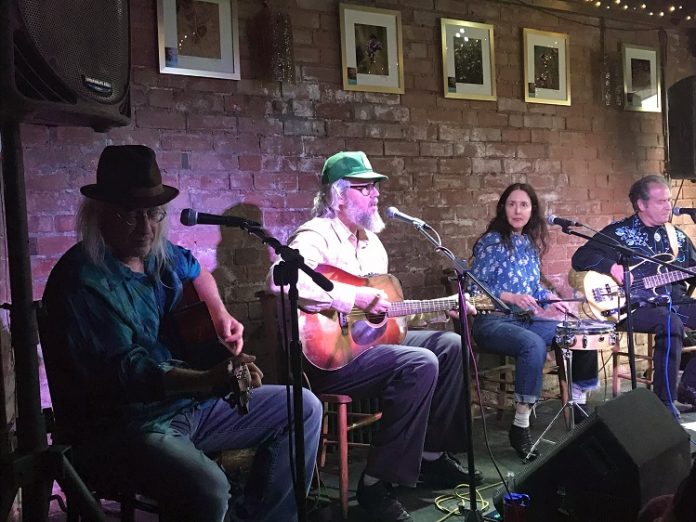 It’s not often you leave a gig in the light, but the early finish tonight means it just about is here. And somehow that’s entirely in keeping with the chilled, sunny, summer vibe when I See Hawks In LA played.

There is no edge at all to the quartet. No friction and it seems that they are all enjoying this as much as their audience. There is a very real possibility that these songs are their catharsis, given that they’ve all had their personal troubles, but this is as genuinely lovely as 80 minutes gets.

Starting with “Turn That Airplane Around” – one of the first songs they ever wrote, is a perfect example of what they do. Harmonies that belong right on their West Coast home, but with a country heart, and as Rob Waller points out after it is played, it was written on the way home from his grandmother’s funeral.

That juxtaposition is at the centre of what they do, and is right there on their wonderful new record, “Live And Never Learn”. There’s a couple of them aired early on, “Poour Me” (their spelling) and the title track are as superb as they are on that.

And, whilst Waller is the avuncular frontman in the truckers’ hat and the deep voice, the rest of the band are quite obviously brilliant musicians to match him. Bass player Paul Marshall sings a couple – the pick of them the jazzy cover “St. James’ Infirmary Blues” – drummer Victoria Jacobs has her moment on “Open Door” and her husband, founding member Paul Jacques offers a brilliant Cajun traditional tune that was played at their wedding. Indeed, he was in fine form all night, his guitar was often a highlight, but never more so than on “White Cross” where his solo was magnificent.

“…Learn” is their eighth album and is a prime example of the fact that the way they look at things is through a slightly different prism to everyone else. “Ballad For The Trees” – the album’s highlight, is top of the shop here too, “Planet Earth” deals with the difficulties of the modern world as only they can and who else but I See Hawks would have a song about wildfires forcing you out of your home and make it riotous and celebratory? No one, that’s who, but they do just that on the rock n roll “Last Man In Tajunga” (and Paul Marshall os back in his home now too).

A show that rather pleasingly forgot the setlist in the second half – I know this because I could see the setlist that was meant to be played – seemed to crackle with spontaneity, and while the closing “Good And Foolish Times” would have been a neat way to finish, everyone deserved one more. “Grapevine” provided it in style.

So, whilst its not normal that a gig ends while it’s still light (I am old, I value an early night, all gigs should end at 9.20 in my opinion….) it is even rarer that you see one this purely enjoyable.