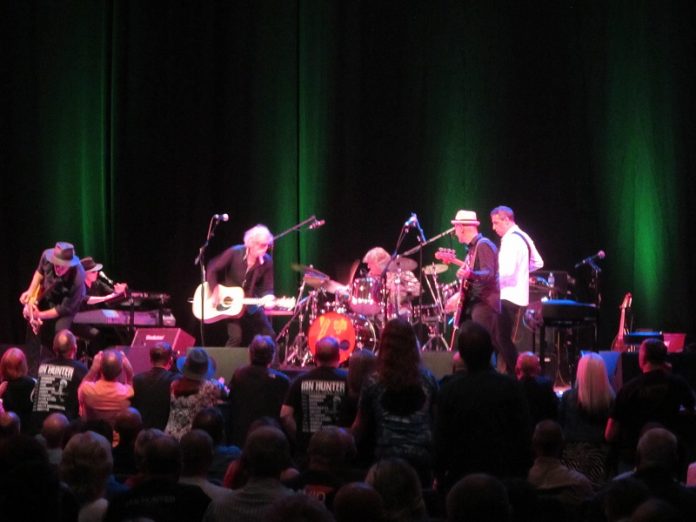 Once bitten, never shy. The hardest working man rock n roll is back in Birmingham

There is little to concern London-based duo The Worry Dolls at the moment. Their new “Go Get Gone” album was released earlier this year and their folky pop music shimmers and gleams here. “Bless Your Heart” is a swampy stomp, while “Someday Soon” is intricate and they pull it off with aplomb. The pair – augmented with a drummer tonight for a bigger live sound – bonded, apparently because they both have red hair, but it goes deeper than that. The vocal interplay between Rosie Jones and Zoe Nichol is special, and the rootsy banjo of the latter recalls The Be Good Tanyas records of yore. “Light Oh Light” written as the result of boredom becomes strangely inspired and is if to prove they want to make the most of their big chance in supporting here, they duly play a cover of Mott The Hoople’s “Wish I Was Your Mother”, but have the class to make it their own. Taking a selfie onstage as the show ends is perhaps indicative of the fact they have thoroughly enjoyed themselves, but more importantly have shown themselves to be a band of some talent.

“I was a dreamer….” Sings Ian Hunter. He pauses. “Then I stopped dreaming” and with that he plays that unmistakable piano opening to “All The Way From Memphis” and 1000 Brummies rise from their chairs to join in.

The music Ian Hunter has created over the last 50 years or so has endured in a way that few others can match. His touring schedule never seems to end, and together with The Rant Band, he manages to do great things time and time again.

One of the key reasons it endures is because he manages to keep things fresh. This is not some trawl through the Greatest Hits that most would do, instead he begins with “That’s When The Trouble Starts” a cut from his “Fingers Crossed” record from last year, and before long the wonderful title track of the one before that “When I’m President” is here too.

But it’s the what comes in between that made him famous in the first place. “Once Bitten Twice Shy” is still just about the perfect rock n roll song. It isn’t the only one.

The set has some surprises too, with “(Give Me Back My) Wings” making an appearance, together with “Standing In My Light” but that’s not to say he forgets the classics, as “Roll Away The Stone” (played here tonight “for the baldies”) is its welcome self.

There is a bond between artist and audience – some of whom have no doubt been watching him since the late 60s – and there is a class about the knockabout fun of “All American Alien Boy” and the acerbic “Bastard” that rewards. “23A, Swan Hill” and “Sweet Jane” end things as ever, but there is – of course – an encore.

For which, as ever, Hunter returns with a glass of wine, but this time with the words “that’s the thing about being good, you have to do more…..” What he does is the brilliant “Dandy”, his tribute to Bowie and “All The Young Dudes” transports everyone back to some other place.

Before the latter he plays “Life” and given that he celebrated his 78th birthday a few weeks back, the significance of the line “I can’t believe I am still here.” Is lost on no one.  Age be damned, though, because Ian Hunter remains one of the finest songwriters and musicians we have – and The Rant Band are so good he won’t be stepping off the stage any time soon.

There is still a mighty long way to go in rock n roll for Ian Hunter.