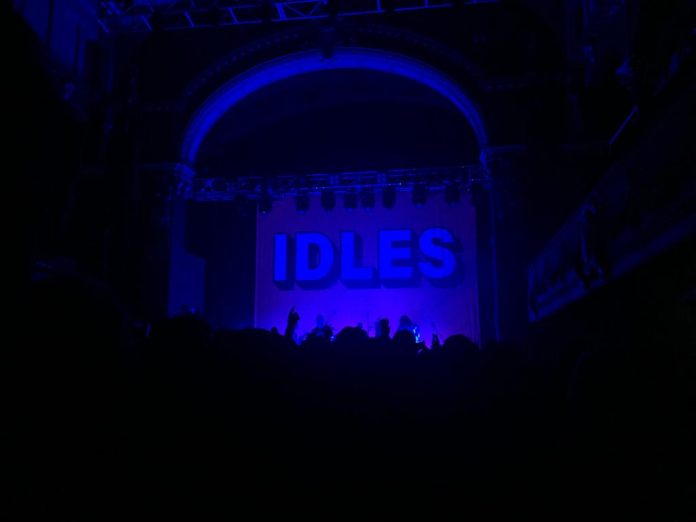 Heavy Lungs
I’ve heard some good things about support act Heavy Lungs so made sure I was in early to catch them. They get straight into it with excellent complex drumming, heavy bass and some great guitar riffs often bordering on metal.

Bristol’s Heavy Lungs are fronted by none other than the real Danny Nedelko who manically screams the lyrics. ‘Poster Boy’ is a blast of complex drum patterns and simple but effective guitar riffs and they move into a series of brutal mesmerising attacks which combine heavy beats, complex bass licks and rock and blues-influenced riffs.
Newly released single “Blood Brother” is met by cheers from the crowd as it is an ode to Idles’ frontman Joe Talbot. They move from fast to slower tracks with ease and the pace is slowed down on the Blur influenced single ‘Stutter’ before the four-piece turn up their trademark ferocity in the final stages of the show.

They have a range of influences from Iggy Pop, Industrial, Blur and garage rock put over with the dark delivery associated with the likes of Joy Division and Interpol. These influences amount to a sound of raw passionate noise worthy of any serious post punk outfit.

Nedelko never stops moving and performs with energy without hardly saying a word which makes for a captivating performance. The experimentation, raw energy, fantastic musicianship and unbelievable passion make for a great set.

Idles
The sold out tour is testament to Idles excellent live shows and their hard work and I am glad I caught them at Coventry Central Library and their excellent performance at Rebellion Festival in Blackpool in August 2018. Despite their new found fame it was nice to see it hasn’t really affected them, Adam Devonshire greeting fans like old mates from behind the merch stall.

Opener ‘Colossus’ with it’s preacher like opening is a great start to the set moving from almost ballad to brutal assault with ease and it is clear that everyone in the room knows every word and is intent on signing along to every track. This is quickly followed by the wonderfully titled ‘Never Fight a Man With a Perm’ with the crowd at fever pitch just two songs in. Joe encourages more women to get into the circle which is an excellent touch adding to the already inclusive atmosphere.

‘Mother” is delivered with menace and drive with the whole crowd singing key lines like ‘The best way to scare a Tory is to read and get rich’, and “Mother Fucker” which the band clearly appreciate and at times can’t quite believe. Talbot acknowledging that their last gig in Brum was at the Hare and Hounds and thanks us for the welcome (listen to more Table Scraps – nice one). ‘Faith in the City’ closely follows.

The excellent ‘Danny Nedelko’ with it’s wonderful lyrics (about the front man from Heavy Lungs) is up next and the reaction from the crowd even more frenzied and even sees guitarist Bowen take an early crowd surf. ‘Gram Rock’ and ‘Divide and Conquer’ are then belted out with force and a dedication to the NHS before the driving drums of Heel/Heal kick in with the band and the receptive punters in one mad sweaty mess. One of my personal favourites ‘1049 Gotho’ is next and an absolute classic.

As ever with an Idles show there is no reprieve and ‘Samaritans’ and ‘Television’ are delivered like a brutal attack on the senses often with the bands excellent vocal harmonies drowned out by crowd.
For Idles there was never going to be a difficult second album and every track seems as good as the next. Anti-Brexit number ‘Great’ had “G.R.E.A.T” sung by the whole room including those on the balcony. Joe has everyone hug someone in the crowd before launching into ‘Love Song’ and ‘Exeter’ has a stage invasion, with audience members playing instruments as the band bounce around the stage clearly enjoying the mayhem.
Cover ‘Cry to Me’ is a clever departure from the stage invasion that it followed and as Joe informs the crowd they don’t do encores they launch into ‘Well Done’ which triggers the best mass singalong of the night.

Joe informs us ‘Don’t read the Sun, it’ll give you cancer’ before interestingly dedicating closer ‘Rottweiler’ to UB40. With it’s pounding drums, amazing bass and punky/angular guitars ‘Rottweiler’ leads itself into a wonderful crescendo making a fitting end to an adrenalin fuelled performance

Idles are an amazingly tight unit with the driving bass and drums of Beavis and Devonshire complemented by the inventive guitars of Mark Bowen and Lee Kiernan and their musicianship and vocal talents shouldn’t be underestimated. Add to this their ability to craft the most catchy tunes around delivered with passion by Talbot makes them a force to be reckoned with.