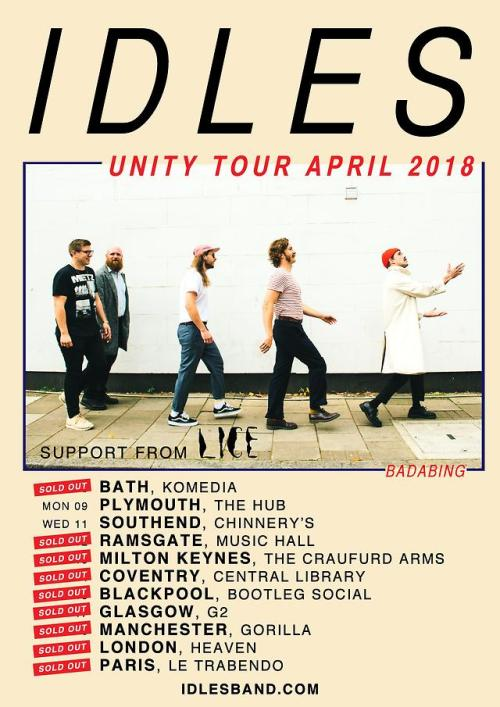 Whoever in Coventry thought to put a gig on in the library should be congratulated for their forward thinking attitude and maybe this is what you need to earn the title of City of Culture.

Tonight’s support Lice like our headliners hail from Bristol, and the room is already full as we stand between the books waiting for their arrival.

They play complex satirical art punk and are a pretty amazing band with crazy lyrics, tempo changes and rhythms they are quite mesmerising. ‘Stammering Bill’ the opening track from their EP ‘It all worked out great’ with it’s opening heavy drum riff is excellent.
Their set flew by moving between melodic indie riffs and chugging bass as on ‘Love Your Island’ through amazing post punk angular rhythms, rock and some of wildest tempo changes you will hear on tracks like ‘Voyeur Picture Salesman’.

They were great and I had to buy their EP. ‘Ted’s dead’ borders on rockabilly jazz with some of the strangest lyrics which can pretty much be said for all of their songs. This was a great set an I hope to see them again very soon.

As the drummer Bruce couldn’t do this show and insisted they play he helped friend Ollie Medlow to learn the set. Ollie played a blinder and to nail this stuff after one rehearsal was some going.

Idles hit the stage with the crowd clearly anticipating the mayhem that is about to ensue. Jon Beavis’ pounding drums that open ‘Heel/Heal’ rattle around the room, before the guitars cut the air, and we hear Joe’s droning vocal roar. The crowd go wild and continue to do so throughout the whole hour long set.

The lyrics and the tunes are driven by the hypnotic bass of Adam Devonshire and pounding drums and this is a tight backline. Over this is thrown the crazy guitar riffs of Mark Bowen and Lee Kiernan, and the in your face lyrics and the whole band yelling the choruses at you which the assembled crowd join in with.

The songs are well dedicated to various causes and people, ‘Faith in the City’, ‘Mother’ and ‘1049 Goth’ with their unforgettable lyrics and tunes are true classics. They throw in some new stuff and ‘Great’ stands up to it’s title with it’s clever lyrics built around building an understand of others political beliefs. Other new track ‘I am scum’ rightly not dedicated to anyone in particular is an honest portrayal of modern day estate life with a great musical attack.

The band’s frontman, Joe Talbot, is political but not in a in your face way, he’s a bit smarter than that. He also recognises that people enjoy gigs in different ways, pointing out that there is always a light shining on someone in the audience who despite looking pretty miserable are clearly enjoying the show.

The final section, features ‘Exeter’ which Talbot informs us is about growing up in a shithole has a great mid-tempo riff and pounding bass and drums with Talbot showing he can also do melodic. The lyric ‘I dropped onto my knees, I prayed to Jesus please, will something fucking happen’ is genius.

The impromptu acapella rendition of ‘I don’t want a lot for Christmas’ and the excellent ‘Lovesong’ give the crowd some respite before they launch full throttle into ‘Well Done’ and ‘Rottweiler’ to bring the show to a frenetic end.

Having formed some seven years ago, it is the energy, humour, and passionate commitment to their music’s integrity that has made Idles one of Britain’ most exciting bands. This was a brutal onslaught on the senses and as most of their shows are sold out I think they are set to take Blackpool’s Rebellion festival and the country by storm. ‘Well Done’ indeed.