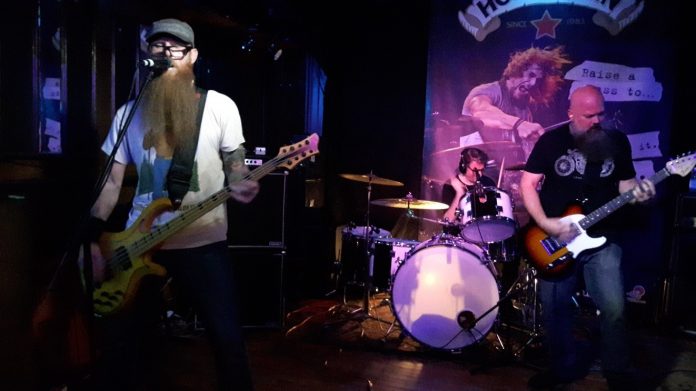 Bernard spends the night with his faves

It’s no secret that I think Idlewar are one of the best Bands around. So on a cold Sunday November night I found myself in Evesham to catch the first night of their UK Tour. The Iron Road was a new venue for me and it turns out to be the sort of place I wish my hometown had. It was a great place to see a Band, letting the crowd get up close and personal and with a decent sound system to boot.

Idlewar are here to promote their recently release album ‘Rite’, which I’ve already given a 10/10 review and having seen the guys on last year’s tour, I knew the latest material was going to sound great. So the big question is did we get fireworks?

Well we sure did as the Band wandered on stage at 10pm to launch into the riff of the year with a killer take of ‘Hang’. This is such a great song and it says much for the strength of their material as a whole that they can use this up at the start. The new album’s opening track ‘Sullen Moon’ was next and it sounded moody and magnificent. ‘Hold On’ and ‘Sing Loud’ complete the opening salvo from ‘Rite’, the latter of which becomes an anthem with stage volume behind it.

Guitarist Rock Graham sounded fantastic throughout the night as he chopped away the rhythm on his Telecaster and fired out searing solos and behind the guitar, Pete Pagonis on drums and James Blake on bass are both powerful and funky in equal measure. A special mention here as well for James Blake’s vocal talents. The albums show him to be one of the best rock voices around and that’s not as a result of any studio trickery as he sounds just the same on stage.

‘Soul’ from last year’s ‘Impulse’ preceded one of ‘Rite’s’ great songs, the single ‘Keep Your Word’.  This set things up nicely for one of the night’s high points for me. ‘Feel The Pain’ from the Band’s ‘Dig In’ EP has a real menace to it and tonight it had a blues feel  to it’s slower paced rhythm and this lead directly into ‘Impulse’s’ strongest song, the magnificent ‘Glory’. Two more from ‘Impulse followed, ‘Burn All This’ and ‘Stone In My Heel’ before they played a trio of fantastic songs from ‘Rite’.

‘Break’ has a terrific stoner riff and is one of the heaviest songs in their repertoire. ‘You’re Gone’ is the closest they come to a slow number but it rocks hard and is followed by ‘Panic’, which is so damn intense it’s not true. They close out with ‘Eleventeen’, the song that first got the UK’s attention when it was played regularly last year on Planet Rock. It’s a great song to end a spectacular night and those in attendance witnessed something truly special. If Idlewar keep delivering music and shows on this level, greatness surely awaits.

Idlewar are playing around the UK this week, for full details use the link