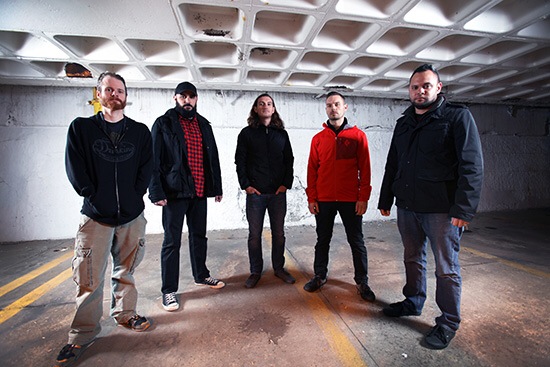 Band preparing Metal Blade Debut Album For 2015 Release, but in the interim their first two records are being re-released

Akron, Ohio post-rock outfit IF THESE TREES COULD TALK was properly formed in 2005 and has grown tremendously since their humble origins in Zack Kelly’s basement as an instrumental project in college. They released their first EP in 2006 and their first full-length, “Above the Earth, Below the Sky,” in 2009. Both were released independently, with vinyl released via The Mylene Sheath. Those laid the groundwork for their breakout 2012 release, “Red Forest.”

To begin 2015, Metal Blade will re-issue both “Above the Earth, Below the Sky” and “Red Forest” on CD – both of which are currently out of print! They are both available to order HERE. While there be sure to check out the two songs that are currently streaming. ‘What’s in the Ground Belongs to You’ from “Above the Earth, Below the Sky,” is streaming HERE. The track ‘They Speak With Knives’ from “Red Forest” is available to stream via YouTube HERE.

“Red Forest” was independently released by IF THESE TREES COULD TALK in March of 2012 (Science of Silence pressed the vinyl). The nine song, 48-minute long album was self produced and engineered/mixed by Zack Kelly and Rick Fuller throughout much of 2011 at NEMeadow Studios in Bath, OH. Will Putney mastered the album and Charlie Wagers (The Fray, mewithoutYou, Caspian) of Three Bears Design was at the helm for art direction and design. This album was followed by a three-week sold out European tour in 2012, as well as a flurry of licensing music for games and film. Music from the band’s catalog has been heard in Sony PS3 titles, and on NBC, MTV, VH1, the NFL, in videos for Vans, and for projects on the Sundance Film Festival. “Red Forest” quietly became a smashing success. Cumulatively, the band has sold over 20,000 copies, with 3,000 on vinyl alone across all of their albums.

As 2014 progressed, IF THESE TREES COULD TALK began work on their third full-length album. It was around that time that the band was approached by Metal Blade Records and signed with the label. Their independent and entirely self-motivated approach to their music and art will not change, however.

Guitarist Mike Socrates spoke about beginning work on their new album and the reissues of their first two albums: “We are extremely excited to get started on the new record. We begin tracking on the 15th of January at our drummer Zack Kelly’s studio in Bath, OH. We did “Red Forest” here, and this is where we feel at home. The new songs are coming together nicely, and we feel that we are progressing in a way that will challenge ourselves as well as the listener. In the meantime, we are stoked that Metal Blade has re-issued our previous 2 albums on CD. We hope you enjoy what you hear, as we couldn’t more excited to present the new album to you down the road.”