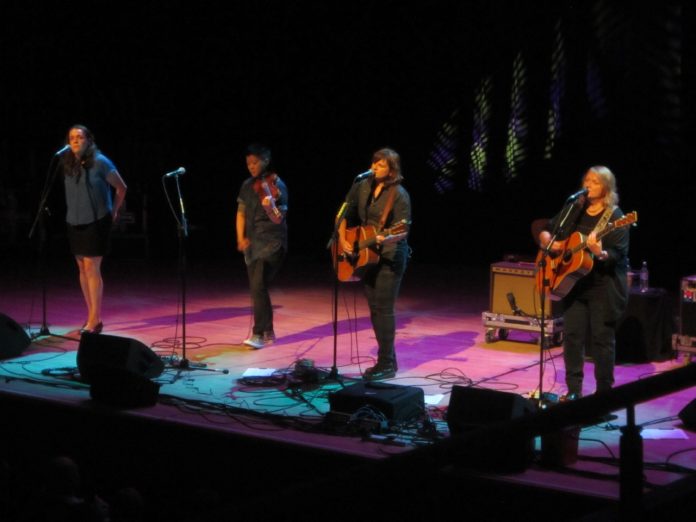 On their first UK tour for nearly a decade, it’s like they’ve never been away

Lucy Wainwright Roche has every reason to remember Birmingham. The last time she played here she was opening for dad Loudon, when a fist-fight broke out. This is just one of many things we learn during Lucy’s set. The “10 years I’ve spent driving around on my own” has been put to good use, and her collection of self-penned songs – one very recent one written just this month about the politics back home is particularly fine – and cuts predominantly written by members of her family is nothing short of compelling. One that neither she nor they wrote (but she did perform with her sister Martha), “The Baby Tree” fits in perfectly with the deadpan humour of the set. A beguiling and thoroughly entertaining performer, Lucy Wainwright Roche is taking care of the family business in her own way. And, so far as we know, no one punched anyone this time.

It turns out we don’t have long to wait to see her again, either as she’s performing harmony vocals with The Indigo Girls. Tonight they are a four piece with Amy Ray and Emily Sailiers also joined by Lyris Hung, who adds her brilliant violin playing to the mix.

It’s almost a decade since the pair have toured in this country and they appear eager to make up for the lost time, but equally there is a real warmth in the crowd towards them too.

“Damo”, written for their friend Damien Dempsey, and the superb “Elizabeth” from their 2015 record “One Lost Day” set the tone for an uplifting couple of hours.

Music that by turns is gentle – the gorgeous “Power Of Two” – and stomps with defiance, as on “Making Promises, the Indigo Girls are at their absolute best when they mix the intensely personal with the ability to make the song resonate to thousands (you don’t sell 14 million records for nothing after all) and to that end “Land of Canaan” and “Olympia Inn”, both sung by Ray, are real highlights, as is the acerbic “Able To Fly” which was penned by Sailiers.

There is time too for a solo song from Emily, from her soon to be released debut (“I’ve only been talking about it thirty years” she laughs) and “Train Inside” showcases her talent. What happens after that though, showcases the relationship the band have with the fans.

Introducing “Love’s Recovery” earlier in the night Sailiers had said “this is an old one” and an audience member asked for “Jonas And Ezekiel” instead – eager not to disappoint, she gets her wish and the rest of  us get to hear a brooding piece of music that evokes memories of Neil Young.

After their breakthrough hit “Galileo” ends things, they return for an encore of “The Hammond Song” – originally by The Roches and dedicated to Lucy’s late Aunt – which sees the breathtaking harmonies that have been here all night, at their best. The crowd-pleasing “Closer To Fine” is turned into a singalong and brings a joyous evening to a close.

Almost ten years to wait perhaps, but sometimes it’s worth it, right? This, most definitely, was one of those occasions.