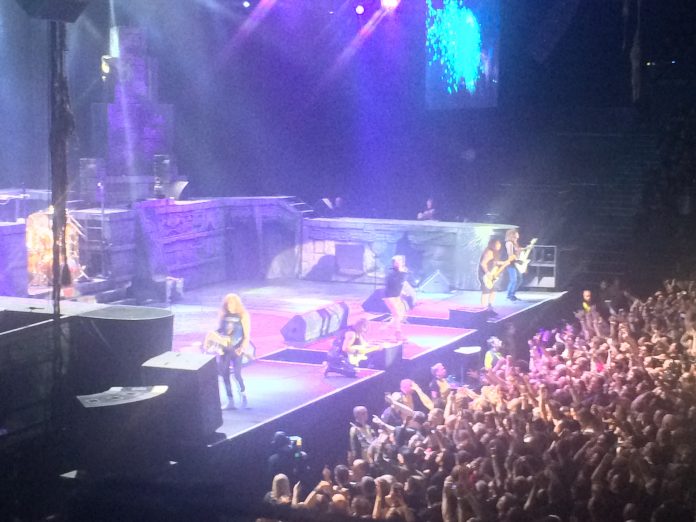 
Two confessions: First, in the interest of full disclosure, Iron Maiden are this reviewers favourite band. Second, in the spirit of honesty, this is the second time we’ve seen them on this tour. The first in Nottingham was great, but it was great because it was Iron Maiden, not because it was a great gig.

A couple of weeks ago on the first night of their first full U.K. tour in six years (a shocking fact in itself) there had been, for our money at least, something missing. Were they too old? Had they just lost their spark, perhaps?

On this showing tonight, the answer to both those questions is: hell, no!

Because whatever was perhaps absent in early May has been most definitely found now.

Sounding perfect, the set is the same as before. Six “Book Of Souls” songs is still perhaps one too many (especially given that it’s been out 18  months) but “If Eternity Should Fail”, the classic Maiden gallop, if you will, of “Speed Of Light” and the central pillars around which the whole show is built, “The Red And The Black” and the magnificent title track belong – particularly the latter with Eddie making his pantomime villain presence felt.

The back catalogue stuff too sounds marvellous here. Adrian Smith is at his best, Dave Murray and Steve Harris grin, Niko McBrain is perpetual motion and Janick Gers is a human dervish, throughout “Wrathchild”, “The Trooper” and “Powerslave”.

It also helps when you can end your set with two of the greatest songs ever written. “Fear Of The Dark” and  “Iron Maiden” (the latter sees the giant inflatable Eddie that appears look down on us with malevolence).

“Number Of The Beast” might be 35 years old but doesn’t sound it, fitting that the man singing it is nearly 60 even if  doesn’t act or sound like it. Rather, Bruce Dickinson is in rare form, giving an unbelievably theatrical and energetic display.

“Blood Brothers” is transformed as usual in the live setting and “Wasted Years” positively soars its way to a conclusion.

On the review a couple of weeks back we wrote about why Maiden endure. Tonight we can write about why they should be cherished. There is no band like them, none anywhere near as good. Few with their energy and almost none can match their passion for performance.

None of them are getting younger. How much longer they can continue to do what they do only they know – but there was no signs of this ending here in Liverpool. Just the worlds best band on almost top form.